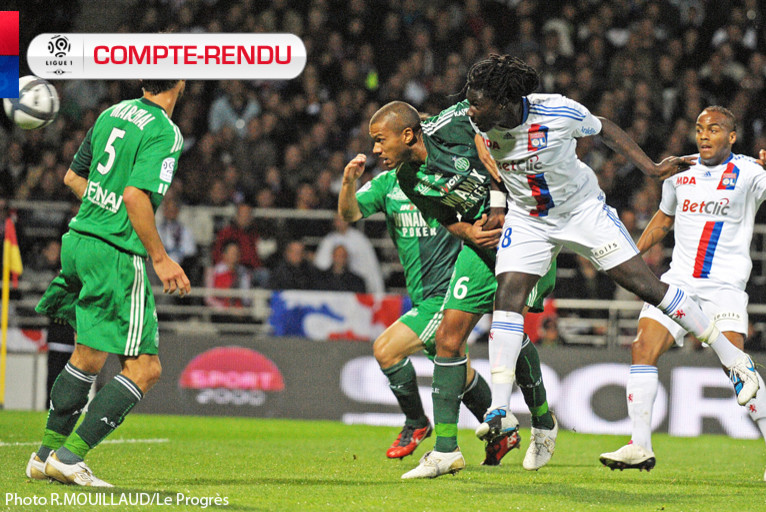 Despite dominating the encounter, OL lacked realism and ended up punished by a free-kick from Payet.

The tension was palpable several hours before the encounter. Thousands of fans already gravitated around the ground more than two hours before kick-off. This Week 7 derby arrived at the perfect time for a Lyon side who were still searching for themselves. Saint-Etienne, however, arrived as league leaders.

Mr. Gautier got proceedings underway in a sold out and red hot Gerland. During the first ten minutes the game was rather blocked because of what was at stake. Both teams applied themselves but without taking too many risks. The first occasion was signed Bafe Gomis. Following a good cross from Aly Cissokho, the OL striker placed a header onto the post of Janot (11’). From a great OL move, Briand penetrated into the right hand side of the penalty area, but his effort was off target (16’). From a corner played in by Gourcuff, Jeremy Toulalan came close to opening the scoring but his header was cleared off the line by Payet (24’). OL gradually took the upper hand on a shaky Saint-Etienne side. Played in by Briand on a counter-attack, Bastos fired in a low shot but his effort was saved by the feet of Janot (30’). Just afterwards Gomis picked up a cross from Gourcuff but was unable to hit the target. Mr. Gautier brought the half to a close with the score at 0-0.

The beginning of the second period was marred by a considerable number of fouls, with Jimmy Briand picking up a yellow card. Too restless on the bench, Rémy Vercoutre was also sanctioned. Marchal deflected a shot with his arm but Mr. Gautier did not give the penalty (55’). OL continued to build up the pressure. Jérémy Toulalan hit the outside of the post with a shot from twenty yards (63’). Briand then got in front of Janot, but saw his header hit the crossbar. Following a debatable foul, the referee gave a free-kick to Saint-Etienne. Payet took charge of the shot and dispatched the ball into the top corner despite Lloris getting a hand to it (74’), an opening goal which came completely against the run of play, angering the OL players and supporters. Kim Kallstrom and his teammates continued to push hard in the quarter of an hour. A headed effort from Briand was saved on the line again by Payet (81’). Källström attempted a shot from distance but fired the ball agonizingly wide. OL drove forward in the final seconds and Rivière was close to adding another goal for the visitors. At the final whistle, the anger of the crowd at Gerland was heard by all. Rémy Vercoutre picked up a red card for a verbal attack on the referee.