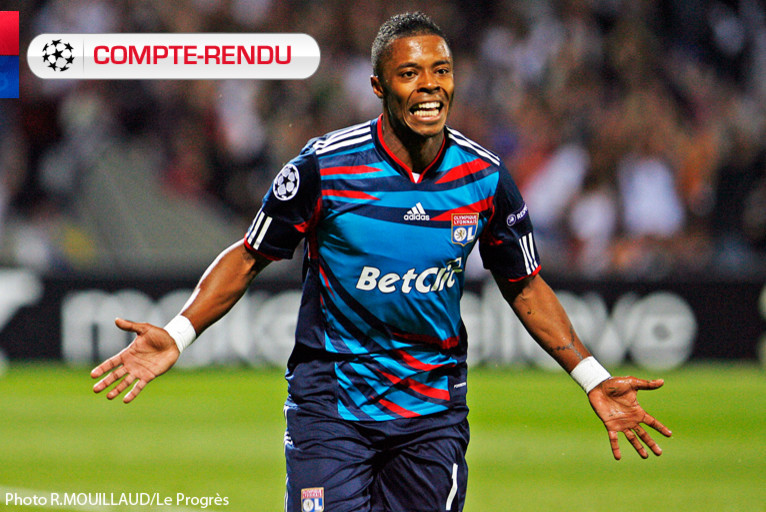 OL won their first group stage match against Schalke 04 (1-0). Playing with numerical superiority for the majority of the match, OL were victorious but lacked realism.

OL started their Champions League campaign with the reception of the Germans Schalke 04. Gerland showed its finest colors to encourage his team.

After just one minute of play, Felix Magath’s players were the first in action with an off target header from Jones. The Olympians held the majority of the ball during the first quarter of an hour but they were well contained by the German team. It was even Farfan who procured the first big opportunity of the game but his half-volley was well cleared by Hugo Lloris. OL were not in reassuring form in the early stages of the game. Lyon opened the scoring slightly against the run of play despite not having made it into the penalty area before hand. Michel Bastos took advantage of a poor back pass from Höwedes to lob the German goalkeeper and then throw himself on the line to propel the ball into the back of the net (21’). Gerland exploded with joy, even more than a few seconds earlier when the giant screens announced a goal by Sidney Govou with Panathinaikos at the Nou Camp. The tone went up on the pitch when Michel Bastos challenged the decision of Mr. Bebek not issue a warning following a foul on Gourcuff. It was finally the OL’s Brazilian who picked up a yellow card (31’). Just afterwards Hugo Lloris saved his side following a shot from Moritz, which was heading goalwards (32’). From an OL counter- attack, Höwedes was guilty of an extremely high foot against Jimmy Briand. The Croatian referee did not hesitate and sent off the Schalke defender (38’). Shortly before the break Yoann Gourcuff sent in a good shot with his left that flew just over the bar. The referee whistled for half-time a few seconds later to the applause of the supporters.

The second period started at a slower pace. With one less man, the Schalke players only came rarely out of their own half. Michel Bastos warmed the gloves Neuer with a powerful half-volley came from the left side of penalty area (53’). Lyon then multiplied their attacks. On several occasions Lisandro came close to doubling the lead. The Argentinean was even deprived of a one on one with Neuer for a non-existent offside (62’). From a counter attack, Briand broke past his defender before sliding the ball to Pjanic who was unable to hit the target, the ball missing the goal by just a few millimeters (67’). The pressure put on by OL accentuated over the minutes. Yoann Gourcuff sent in a free kick which went just over the bar. From the top of the head, Jeremy Toulalan almost fired home following a free kick from Pjanic, Neuer then saved from a point blank range shot fired in by Lisandro Lopes (78’). Despite a last opportunity, Claude Puel’s players would win by the narrowest of margins, a good start for the 2010-2011 Champions League.