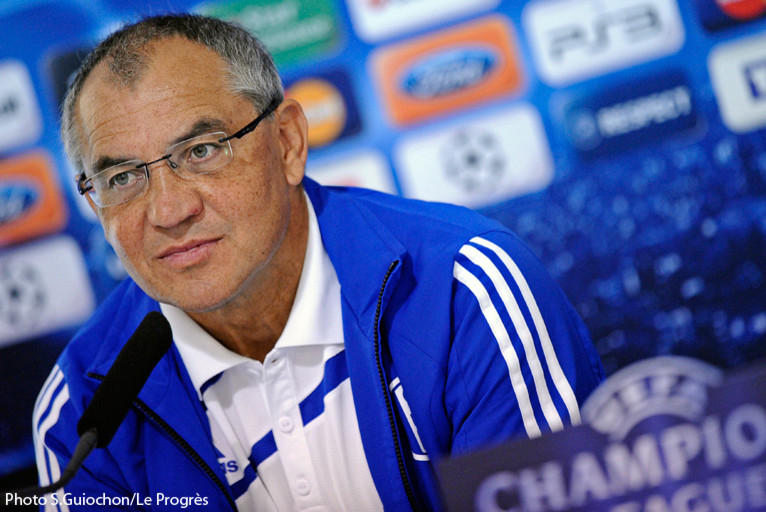 The German coach arrived in front of the press at 17h30, just after his captain Manuel Neuer and his French defender Nicolas Plestan.

How do you explain the complicated start to the season?
As you know, we made many changes to our squad. Lots of players left, others arrived, and there are even some who joined us after pre-season. It is only now that we are able to work perfectly.

How are you approaching the Champions League this early in the season?
This is a change of competition for sure. But we knew that the schedule would require us to play the European Cup soon. We are all happy to be here and we will try to put in a great performance. Our goal is to qualify, it starts tomorrow. We have a role as an outsider, and the Champions League is a good way to start from scratch this tough start to the season.

You have conceded six goals in three games, will you put out a defence minded side tomorrow?
During the first two games Höwedes did not play, Nicolas Plestan has only played the last game in central defense, and I think they will make a good central defensive pairing. I like what I saw against Hoffenheim, and I think we will be able to stabilize our problems on defense. Afterwards, not all the problems come from the defence, and the whole team needs to pull in the same direction.

Lyon brought in a few players during the transfer window, including Gourcuff. Do you think this team is better than last year?
The arrival of Yoann Gourcuff can only be a plus point for Lyon. But, the squad needs to be able to play together. That's why I think that Lyon have had a complicated start to the season, like us. The team is not yet at their peak, but there are a great many qualities in this side.

You’re making a quick return to France, have you provided your coach with any information?
The coach knows all about the teams we will be facing, he studies them well. I don’t think he needs anything from me.

We don’t really know Schalke very well, what are the reasons for the tough start of the season?
There are many new players this season, and I think that stops us from gaining the momentum we wanted. There was also the international break, many players went away on international duty. I think it plays into the fact that the results are not there yet.

What kind of atmosphere are you expecting for this game?
The Lyon fans are bound to be very active because it is an important event for them, they have high hopes for their team. But I think the atmosphere will still be different from what we can see in the stadiums in the Bundesliga, less intense.