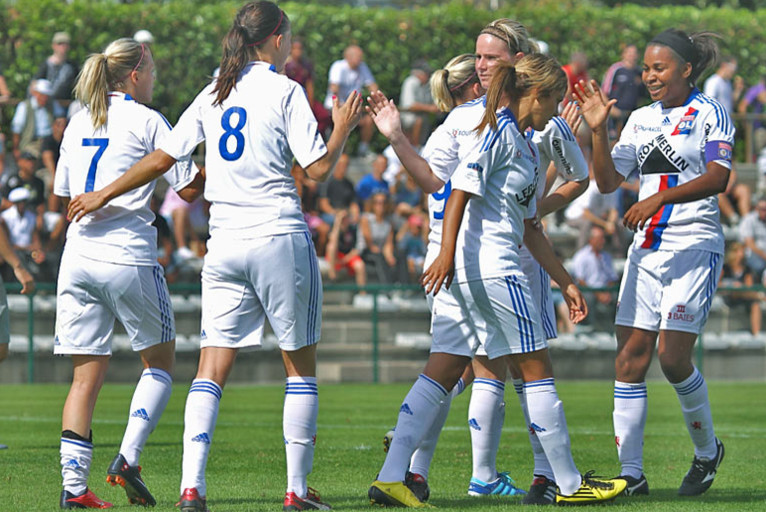 OL did not mess up their first match of the season, easily defeating Toulouse.

OL women did not hold back on this first day of the season, on Sunday afternoon at the Plaine des Sports at Gerland. Against a relatively young team of Toulouse, Patrice Lair’s players sometimes lacked inspiration during the first half, before crushing their opponents after the break.

Lara Dickenmann turned around the situation after a quarter of an hour, picking up with a sliding tackle the cross played in by Lotta Schelin (1-0, 16’). From a similar action, the new recruit Eugenie Le Sommer offered the second goal to Louisa Necib just before the break (2-0, 45’), in front of an enthusiastic audience.

After chasing the ball throughout the first period, the Toulouse players broke down after the break, conceding two goals from Eugenie Le Sommer (3-0, 47’) and Lara Dickenmann (4-0, 49’). Each time, the keeper Karima Benameur was left all alone. Sandrine Bretigny, who came on as a substitute, finished off proceedings. At first with a fantastic move which was finished with a volley just under the bar (5-0, 73’), then by winning a one on one situation with her right foot (6-0, 83’). The OL striker inaugurated in the most beautiful way her new nickname: "Bretbull, it gives you wings".

Thanks to this first victory, OL have taken first place in the D1, taking advantage of PSG’s 3-1 defeat at Montpellier, and the 1-1 draw between Juvisy and Henin-Beaumont.