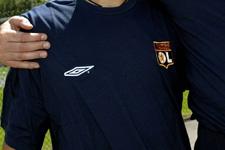 Presentation of all teams which play in OL formation.

From 14 to 16 years old, the young players are given the opportunity to:
- pass the ‘Bac’ in four years at the Lycée Frédéric Faÿs.
- follow special classes specifically tailored to a Bac STT.
- pass a business diploma (BEP: VAM) in two years at the Lycée Louise Labé.
Each of these courses permits the students to attend the six or seven training sessions per week. The 16-year-old players with an ‘Aspiration’ contract or a placement have the chance to take a CAP in information technology or communications in two years.

- Pre-Formation
Young players aged between 12 and 14. A three-way agreement between the National Education, the academic institutions (Gabriel Rosset College) and Olympique Lyonnais. A boarding school is provided by the St Louis-St Bruno College.

L'éveil - initiation programme brings together players from 6 – 12 years of age in three categories.
Débutants 6 to 8 years: Regional tournaments throughout the year
Poussin 8 to 10 years:
Benjamins 10 to 12 years: Rhône District Championship