Rising through the ranks 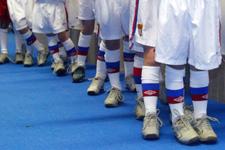 OL didn’t need to be crowned champions of France to attract an army of hopeful kids, all desperate to become part of OL’s Centre de Formation (Youth Development Centre)... "The club’s centre has a reputation. It’s due in part to the club’s fame, but above all to its own history, the qualit

Rising through the ranks

OL didn’t need to be crowned champions of France to attract an army of hopeful kids, all desperate to become part of OL’s Centre de Formation (Youth Development Centre)... "The club’s centre has a reputation. It’s due in part to the club’s fame, but above all to its own history, the quality of its infrastructure and even the education it proposes,” reveals Alain Olio, the director of the Centre…

After a normal education at the Saint-Louis-Saint-Bruno College (high school), OL’s youngsters pass their college years at the Faÿs establishment at Villeurbanne, in special classes that bring together all the top-level athletes from the Rhône-Alpes region. “Above all, we instil in them a culture of working and excelling themselves,” explains Robert Béroud, OL’s educational director. The system seems to work well with secondary subjects comprising an education over four years instead of three: “With seven training sessions per week this formula works best. Once the young players go for their Baccalauréat they have to have the same standards as everybody else. If they decide to follow classical streams of study (Science, Literature, Economics and Science with tertiary studies) the players can also have the chance to pass a business diploma BEP VAM at the Louise Labbé School. Robert Béroud explains: "Before a player’s personality and education didn’t count, but OL quickly realised that you can’t separate the personality of the player on the field, from the personality of the player in his everyday life.”

The first steps with the pros

Before chasing their dreams shoulder to shoulder with the professionals, OL’s young players are heading daily to the training complex at Tola Vologe. "Last year, thanks to Paul le Guen’s policy, the CFA and the professional squad often shared the same facilities. It’s a chance for the young players to enter into the pros’ world. To talk with them and watch them work is important. It’s motivational and it’s worth more than all the lectures we can give them,” explains Alain Olio, director of the Lyon centre.

If the young footballers train alongside the likes of Juninho, Carew, Caçapa and Coupet, they are almost playing in a Ligue 1 anti-chamber for the CFA. The stage is important, but it’s also important that the players don’t get too used to it either: “Our biggest problem is that it’s good for the players to have a whole year in CFA, but they have to take another step the following year.” That explains the club’s policy of loaning out players to other clubs.

“Faced with the competition and the pressure, it’s essential for the young players produced at OL to be psychologically balanced. It is, in fact, one of the main factors of an ultimately successful integration into the professional set-up,” confirms Alain Olio.

Today, more than ever, OL is focused on its youth recruitment. “Already at 14 years of age we consider just how much a player can bring to the club further down the line and how much it will cost us if he’s not produced by this club,” reveals Alain Olio. It’s not easy to predict the sporting future of an adolescent, let alone his psychological development. In order that each young player reaches his full potential the club doesn’t leave him to his own devices but rather imposes daily training sessions as soon as he reaches 14 years of age. “The most important qualities of a great player are his speed, his endurance and his playing intelligence. But today, it’s the psychological aspect that proves to be the difference and we pay special attention to this.” It’s a recipe for success: OL has the most successful Centre de Formation in France in the last ten years with 13 titles.