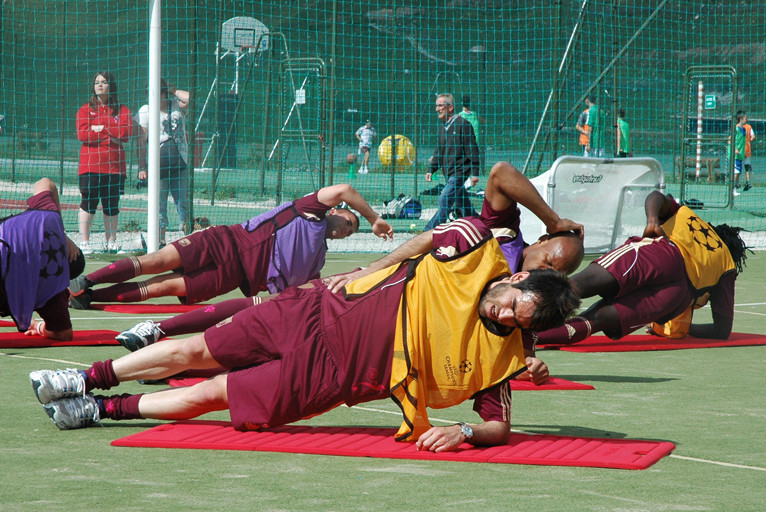 A busy morning for the squad at the Savoyard camp...A morning which started at 7h00...

The clouds seem to be stuck to the mountain sides. Will they disappear revealing rain or sunshine? The muscular wake-up was done with a run around the lake. After a warm-up to get the heart rates up, the two laps of the lake, 4 200m in 20 minute, for the entire squad had to be done in 20 minutes. The objective was achieved before breakfast. While the majority of the squad ran, the goalkeepers with Jo Bats warmed-up on their bikes. Lisandro Lopez also climbed on his bike as he has a slight knock to the foot. As for Belfodil, he brought his session to a close early with a tendon strain.

Before getting back to work, the Lyon players posed for a photo with a freshly shaved Ederson. It was the occasion to celebrate the birthday of Dejan Lovren, and also for Claude Puel to remind everyone that the fine system had begun. Yes, there are still some players who arrive late. Two workshops started at 10h00. 1h00 on the synthetic pitch close to the lake with a five a side match for a duration of five minutes followed by five minutes of different exercises. 1h00 in the weights room with a circuit which worked all of the muscles. Lopez, Gassama, Kâllström, Cissokho settled on the indoor workshop only.

During the match sequences, there were many magnificent gestures and spectacular scraps. The rules were very strict: one control, one pass and a shot from outside of the line … It was the occasion for the manager Claude Puel to work things up with his desire to win and how uncompromising he is with the rules, especially when things weren’t going his way! Nicolas Seguin was forced to shorten his session after picking up a knock to the ankle.

At 12h00, everyone headed back to the hotel. The next rendez-vous would be at 17h00 on the Eric Cantona pitch. For information, four OL players underwent unexpected drugs tests.