Nicolas Seguin from the sprint! 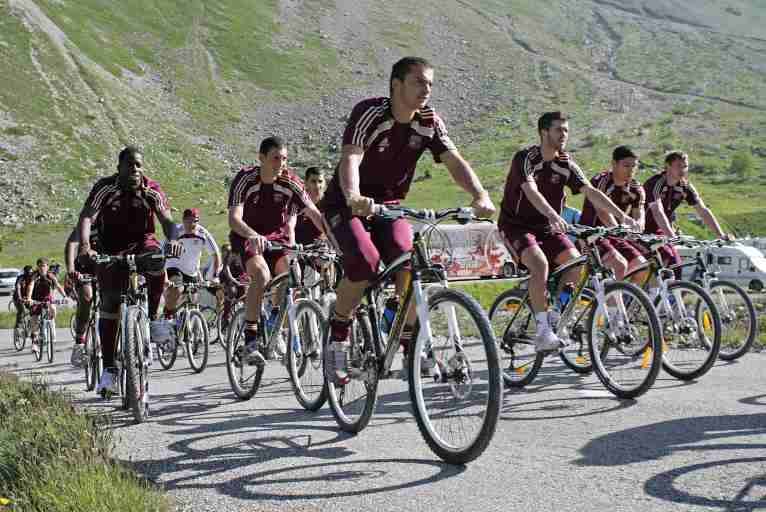 A superb race… a winner at the finish… records pulverised… all of it in the sunshine. A climb of the Iseran which will remain in the memory…

At 8h00, the bikes were loaded into a van. At 9h00 the bus took off in the direction of the foot of the Iseran towards the exit from Val d’Isère, on the day that the Tour de France started… 11kms to get through with a climb of 700m to boot. Hope and fear can be seen on certain faces. The effort will be intense with certain « cyclists » looking to win, like Claude Puel, Manu Orhant, Nico Seguin, Mathieu Gorgelin… others just want to finish with a better time than last year. And then there are those facing the climb for the first time Cléber, Gomis, Cissokho, Briand… You can feel the tension … We wonder who will win … You can feel that everyone wants to stop the coach from finishing victorious!

At the start point on the Pont St-Charles, at 2 070m, the difficulties to come could be discerned. Jo Bats went off as a scout 10 minutes before everyone else. « Jo » will once again be climbing with his mentality, needing 1h 40 to get over the finishing line. We can only say congratulations once again for this effort. The guide Philippe gives advice on which gears to use to avoid building up the heart rate too quickly. Abdel Redissi shoots off quickly ahead of Manu Orhant, Claude Puel, Cléber, Seguin, Gorgelin… Gomis, Boumsong, Briand close the group.

As early as the 2nd kilometre, 5 brave guys took the lead and would not leave the front positions. Doc Orhant, kept trying to make the break away, the coach Claude Puel kept up the efforts to try and stay in contact with Nico Seguin, Mathieu Gorgelin and Cléber just behind him. The tempo is regular, nobody wants to give up. The two youngsters settled on the tactic of staying in the slipstream of the coach to better overtake him at the end, which just annoyed him and he almost stopped to let the two leeches get past him, but there were no dice.

Further back, Ederson was putting in a good performance just like Sylvain Rousseau… Kim Källström rides whilst singing … Cris shakes his head but climbs better than in previous years, just like Rémy Vercoutre, with his headphones on and then the rest of the group. As the group approaches the summit, snow decides to join them … The time at the 6th kilometre… 30 minutes, at the 9th…42 minutes… the record is going to fall.

With just 1km to go, apart from Cléber who has been left a little behind, the victory is still within the capabilities of a number of riders. Then, Nico Seguin attacks the Doc taking an advance of a few metres which he will keep to the end. 6 seconds later, the Doc still held a lead over Mathieu Gorgelin and Claude Puel. A superb race, won in 51 minutes and 52 seconds with the following trio coming in 6 seconds later! What an effort.

The players start arriving en masse, each one looking at their stopwatch noting with pleasure the progress in comparison to early attempts. The one hour barrier has fallen for a number of these “cyclists” of the day. Claude Puel has started to get over his defeat. As time goes by faces are more and more marked by the effort. Bafé Gomis and Aly Cissokho finish their calvary together, in the time of a football match … Jo Bats, escorted by Guy Genet and Patrick Collot, the latter having gone back down after finishing in 58 minutes, arrives at the summit under the gaze of the group once again under the charm.
The terrifying ordeal of the training camp was finished off in magnificent style giving some superb sporting images, as much mental as physical. Now it is time for lunch at Bourg-St-Maurice before the rafting in the afternoon.