The first morning at altitude 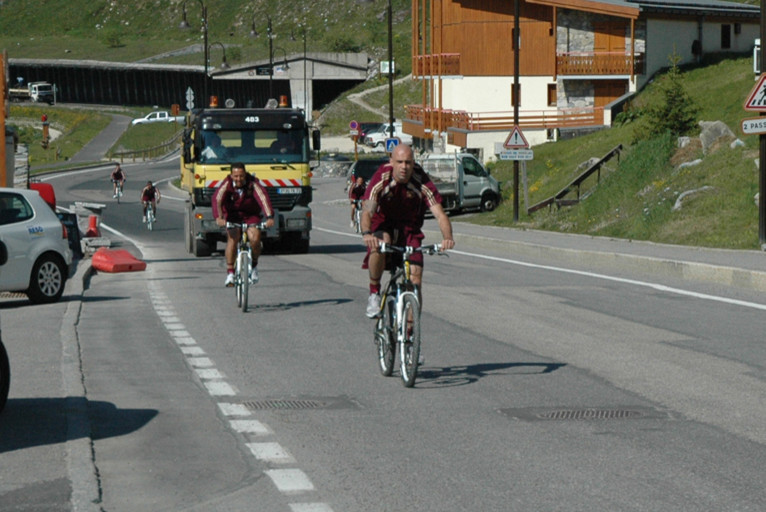 The OL training camp officially starts today with a morning of physical activities at the Lagon centre...and around it...

Those who were brave enough to get up very early were able to admire the light rising and shining on the lake, long before the day’s work started. A solitary fisherman had already installed his rod. The lap of the lake should be started slowly to get your feet before gulping down, as the time slips by, the two hills that will give you indigestion. The course opens your mind as much as your appetite and your lungs. So a quick thought for the France team who stayed here in preparation for their catastrophic World Cup campaign. Another thought for the OL players who set foot here over the last few years but who are no longer squad members. Turning around this dark water brings back memories of Abidal running like a greyhound and that he still holds the lap record.

At 9h 30, the group gets ready to start work. On the schedule, three workshops: two in the fitness centre and one on the bikes between the centre and the Val Claret. 40 minutes per workshop before changing. Today’s sessions will not be full on, as for the bikes there were a few scraps already. Of course Claude Puel did not take long in getting himself settled in with his group alongside the very powerful Anthony Lopes. They were well ahead of everyone. Cris showed his shaved head at the front of the race. The rest of the group was long way behind them. As for Lamine Gassama, he was well back but with a good excuse. During the holidays he underwent an operation on his right shoulder and has to avoid all contact until mid-July.

Everyone would experience this morning joy in a different way. For some it is a first experience of Tignes: Cissokho, Briand, Lisandro, Gomis, Lovren, Cléber without forgetting youngsters like Blanc, the native of Avignon with his lyrical accent, the youngest of the 23 just behind Samuel Umtiti at 18. “I went off a little too quick on the bike and I paid for it, it doesn’t matter I finished well enough. We’ll see for the rest … I’ve been playing football since I was a kid and always wanted to be a pro. My ambition for the season is to play with the CFA side”. 120 minutes after things started and it was time to head back to the hotel Montana for a shower and lunch. “We focused on the repetition of efforts today and not intensity. It is this repetition which is tiring for them, afterwards we will add to the intensity”. Emmanuel Ohrant, the doctor explained the aim of the session.

At 17h00, Cris and his team-mates will start the walk to the glacier. Philippe the guide, who can descend the 1 000M in 60 minutes when running or 80 when walking, thinks it will take two hours. “We’ll see. I’m a little bit worried about the weather, there could be a storm. Once we’re on our way we cannot take the funicular. We would only be able to turn back”. The kit for the walk has already been set out at the hotel. While waiting for lunch, Robert, the bus driver is taking advantage of the sun. He is the official OL driver since the 6th of January 2006. “I started with the 2-1 victory over OM and a fantastic goal from de Sidney Govou. OL then beat Nancy 2-0”. Robert has no problem with his memory.