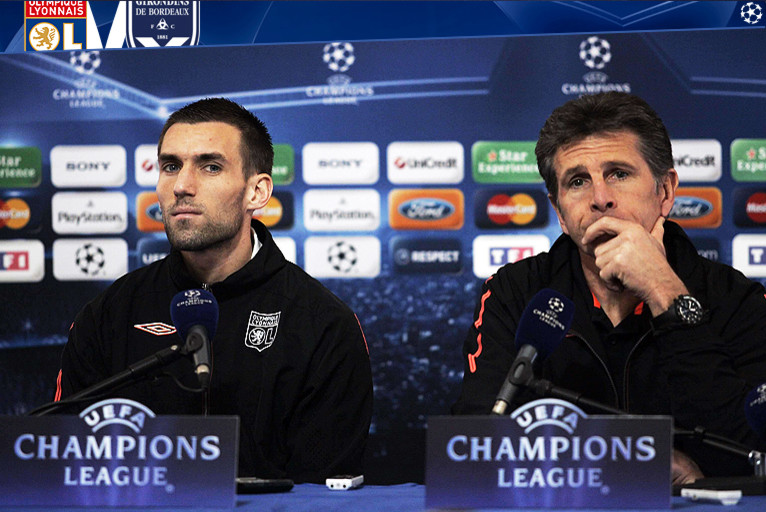 On the eve of the Champions League quarter-final first leg, Anthony Réveillère and Claude Puel answered questions during the traditional pre-match press conference at 18h00.

- How should OL go into this match that doesn’t really feel like a European encounter?
With the number of journalists present, it still feels a little like the Champions League. Even if we are up against Bordeaux, it’s the quarter-final of a European cup. We are preparing in consequence. It is a double confrontation, completely different from the league matches.

- Do you have a revenge to take over a Bordeaux side that came and won at Gerland in the Ligue 1?
Not at all, it’s a totally different competition. We have to get through this match, which will be decisive, well. With our experience in this competition, we know it is important not to concede at home and score as many as possible. I’d settle for the same scenario as against Real Madrid.

- Has the scandal which surrounded the match against Grenoble been forgotten?
Yes, that is all behind us. We did what we had to against Grenoble. It’s true that there was a lot said about this game, but we’ve turned the page.

- Are Lyon favourites for tomorrow night?
You could say that as we are playing at home. It’s up to us to play and score in front of our public.

- Will OL’s experience in the Champions League count?
It’s true that with Govou and Cris, there are three of us who have played in the three quarter-finals, but you mustn’t forget that OL have a number of new players. I hope that this experience will come into play just like during the return leg against Real Madrid where we did not panic, even though we had conceded right at the start of the match.

- Laurent Blanc has said that it will be imperative to win in the duels tomorrow night. What do you think?
We’re not expecting there to be a lot of space on the pitch tomorrow night. It will be important to win our duels but we mustn’t forget to play as a team. We will win the tie with the full group of 18 players

-Are Lyon favourites?
It will be a well balanced tie. Bordeaux have the advantage of playing the return lega t home, which is not negligeable. It’s a European cup match, the context is totally different ot that of the league. We are preparing for the game with that in mind and a place in the semi-final up for grabs. That is not to be neglected either.

- How will you deal with the centre of defence?
I have four solutions with Mathieu Bodmer, Jérémy Toulalan, Maxime Gonalons and Jean-Alain Boumsong. I haven’t made my mind up yet.

- Did you glean any information from the final of the Coupe de la Ligue?
No, each match is différent. Bordeaux were maybe focused on Lyon, rather than Marseille, in the second half.

-  Would 1-0 be a good result tomorrow night?
Champions League matches are always open. 1-0? We’d take it, as we would 2-0 or 2-1. What is important is to keep our chances alive for the second leg.