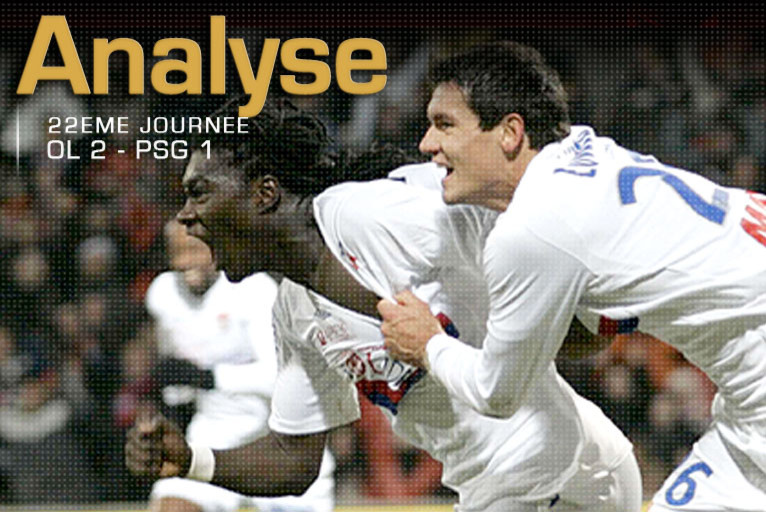 The appetite for victory and the urgent need for points in order to get closer to the podium was at the heart of the motivation of the 22 players out on the field for the encounter.

Especially as in front, Bordeaux had shared points with Boulogne, Montpellier had disposed of OM, Lille and Monaco continued their fairytales...

The club from the capital had refound their colours and their first choice forward line, up against a new look OL defensive pack with Lovren at right back , the player discovering for the first time the stamping ground of the seven times French champions. In a packed out ground decorated with OL’s colours, it was Paris who started the match in better form.

However, the first warning would come from Lyon (if you don’t count the card picked up by Armand for a foul on Källström 5’). It was Pjanic who fired in the first effort of the match, a free-kick from 30 metres out, forcing Edel into a full length dive to save (6’).

At the other end of the pitch, from PSG’s first corner, with his first real ball, Erding slid the ball home at the near post (10’). Just a few moments later, Hoarau escaped from the vigilance of Cris and saw his shot go just wide of the goal thanks to the intervention of Vercoutre. The duo Erding-Hoarau proved that their limited time on the pitch together this season (37 minutes during Valenciennes-PSG) was not a problem for them …
Hoarau and Vercoutre were at the centre of the action again, when the latter palmed away a header from the Parisian striker (21’).
OL were starting to wake up, but PSG remained dangerous. Erding was unable to hit the target (25’), a mix-up in the PSG box came to nothing (26‘), Toulalan hit his effort wide (29’), a powerful effort from Kim was pushed away by Edel, who would win the ball from the resulting corner (35’). Before Mr Kalt brought the half to a close, OL came within a whisker of equalising. Toulalan hit an effort from 35 metres which Edel pushed onto his own post … Gomis was unable to get to the rebound to fire home (41’).

In the following 45 minutes, desire would change camps. It was this desire that pushed Vercoutre to sacrifice himself to save from Erding and Hoarau, with a horde of blue shirts facing him (47’). There was desire to fight back … from a long pass by Pjanic, Gomis broke through on goal only to be pulled down on the edge of the PSG box by Sakho. Off! (60’) Giuly came off for Jallet, Pjanic for Delgado (64’). Gomis’s desire had been stopped by Sakho… and then by the post (70’). But, from a Delgado corner, Lovren headed at goal with Edel only able to push the ball to Bafétimbi who did not hesitate in slotting the ball home (77’ ; 1-1). Just minutes later, Bastos sent in a free-kick which Lisandro deflected to the head of Cris who lobbed the keeper for OL’s second goal (82’; 2-1). Just before, Gomis had hit the post and the crossbar before leaving his partners (91').
With desire, OL showed that there was no way they were going to suffer a third defeat in a row after the losses to Monaco and Lorient in the domestic cup competitions. With their third consecutive victory in the Ligue 1, OL are now just one point from the podium… and 8 from Bordeaux.