For the Press, OL "missed an opportunity" 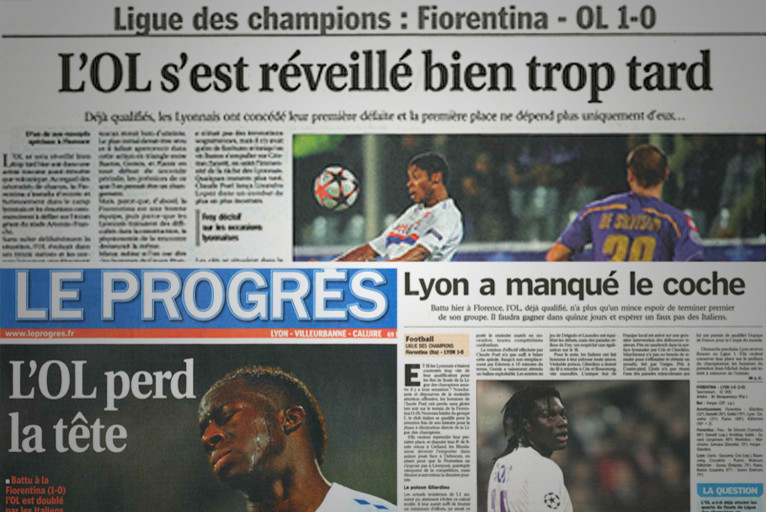 For L'EQUIPE, who titled « OL were up against a crack side », in pushing away all of OL’s assaults, Sébastien Frey was the principal reason for the defeat of Claude Puel’s players in Florence. At the same time noting that « first place in the group was slipping away », the paper explained that to finish top of the group, OL had to beat Debrecen in two weeks time and hope that Fiorentina do not win in Liverpool. Or beat the Hungarians by more than two goals if the Italians and English draw. Régis Testelin remarked that « OL no longer have the keys in their hands ». Of the OL performance, he underlined « the irreproachable team spirit and the intensity of the encounter. The behaviour of OL’s three midfielders was worthy of the event and allowed OL to rival their opponents throughout the match. But it was the others, almost all the others, apart from Lloris and Cris, who disappointed ». He concludes his analysis by noting that « this first defeat of the season in Europe (…) was down to an OL side far from their best. A team which appears to have not progressed … »

The disappointment of Ali Cissokho was on the front page of the LE PROGRES : « OL lose top spot ». The regional daily paper laments that : « OL woke up too late », « Lisandro, Delgado and Ederson tried hard but too late ».

Jeu et joueurs spoke of a « a really solid match » from Cris, given a score of 7/10. Christian Lanier looked back at the performance of Miralem Pjanic, who « showed all of his technical ease trying to find solutions, even in the middle of the storm ». At the same time admitting that « he wasn’t successful in all he did », he states that « Miralem proved to everyone just how good a footballer he is (…) behaving like a great ».

For AUJOURD’HUI EN FRANCE, who affirm that « Lyon missed an opportunity », « OL now only have a slight hope of finishing first in their group ». The analysis is without concession: « nonchalant and showing no attacking desire, Claude Puel’s men lost without any glory. (…) The combined absences of Bodmer, Clerc, Toulalan or even Réveillère do not sufficiently explain this. »

Libération noted that « Lyon made a bad move in losing to Fiorentina ».