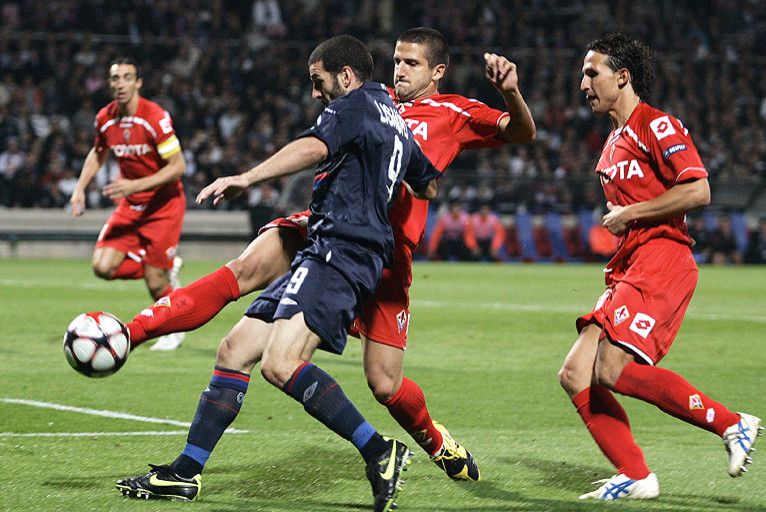 OL head to Florence to try and guarantee first place in the group or take out a serious option...Fiorentina would be well inspired to win the game before their final match away to Liverpool, they would in that case be qualified. If not, everything would be to play for at Anfield...

It is a summit between two sides who do not have the same ambitions or the same obligations before their encounter. OL have guaranteed their participation in the last 16 of the competition for the 7th time in a row, with their draw against Liverpool at Gerland. It remains for them to take first place in the group, a first place that can offer undeniable advantages, even if it does not guarantee a ticket to the quarter-final. Remember AS Roma!

Before this fifth group stage match, OL are in the best position. In effect, 3 diffrent scenarii can ensure first place for Cris and his team-mates. A defeat in Italy, a win against Debrecen and a defeat fro Fiorentina away to Liverpool. A draw at the Artemio Franchi, then a win against the Hungarians, and, obviously, a victory on the banks of the Arno. There is, however, also the possibility of defeat on Tuesday night and that Gilardino and his team-mates win in England … How will OL play, in the knowledge that the do not have their backs «completely» against the wall? With assurance, we hope, unlike the match against Grenoble… otherwise things could go quite wrong!

OL will be deprived of Réveillère, Clerc, Toulalan, Bodmer and Gonalons. The absence of the two experienced right backs should allow the young Gassama to start his first European match away from home. Claude Puel should also make changes from the team that started the match at the Stade des Alpes last Saturday. Cissokho will return to the defence. There is also a good chance that Pjanic or Bastos start the encounter as well. It remains to be seen whether or not Gomis and Lisandro will start the game together?

Fiorentina, as we have said, would do well to try and do better than a draw, which would satisfy Lyon. This draw would be synonymous, at the start of December, with a decisive match at Anfield against a Liverpool side who will surely be victorious against the Hungarians of Debrecen. It would signify a match for second place, in the knowledge that the Italians were victorious 2-0 in the first match against the Reds. So, how will Prandelli’s side play, a side who were particularly seductive during their match at Gerland?

They will also be handicapped with the absence of a number of important players Mutu, Jovetic… On top of that they come into the match on the back of a defeat at home in the league against Parma (2-3). But, the permanently dangerous Gilardino fired home two goals and Dainelli’s team-mates will almost certainly be motivated by the 1-0 defeat in the first match against OL at 10 against 11, without forgetting the 2-1 defeat at home last season which deprived them of a place in the last 16 of the competition.

This is a match where OL will be expected to lift their level of play as they have, systematically, done this season on the European scene. Let’s not forget that they are still unbeaten! On Tuesday night, the match really will be a summit affair in Tuscany.