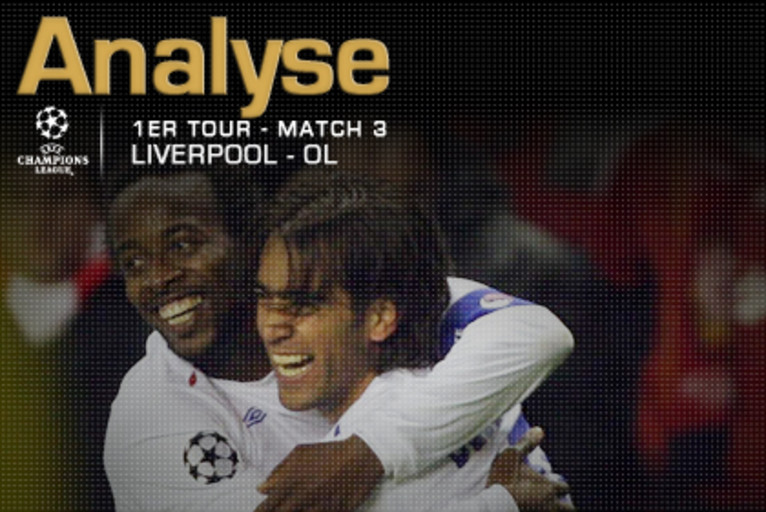 A goal down and handicapped by the injury to Cris, the OL players showed great solidarity and won 2-1 thanks to some great coaching from Claude Puel. With 9 points after three matches, the last 16 of the competition seems to be close for Lyon.

[IMG50014#C] As of the very first minute, the Reds threw themselves forward on the attack with a good effort from Steven Gerrard which was deflected out for a corner (3’). Little by little OL worked their way into the Liverpool camp, with Jérémy Toulalan seeing a left foot shot from over 30 metres fly wide of the target. Just afterwards, Lisandro was on the receiving end of a fantastic cross from Cissokho but saw Pepe Reina on the trajectory of his header (10’). Kim Källström then tried his luck with a volley. His effort was a joy to watch, but it did not pu the Reds keeper in any danger (18’). Lyon and well negociated their start to the match. In the 25th minute, Rafa Benitez was forced to bring off Steven Gerrard, who was far from his best, replacing him with Fabio Aurelio. On a counter attack led by Kuyt, Cris slipped and was hit on the head by the knee of the Dutchmen. Groggy, the Brazilian took a few minutes to regain conciousness (35‘). With OL down to 10 men, Liverpool created a huge chance with Kuyt then N’Gog. Makoun and then Lloris saved their team in style. On the counter attack again, Aurelio sent in a strong cross in front of goal, Benayoun took advantage of a mix-up in the box to slot the ball out of Lloris’s reach (42’). The Reds were one nil up, but this was not the only tough break for OL. The second was seeing Cris leaving the field on a stretcher, unable to get over the knock to his head. The youngster Max Gonalons came on in his place in the centre of defence. From a right wing cross, Hugo Lloris managed to keep OL in the match with a fantastic save following a header from Aurelio. Having been hit hard, OL found it difficult to finish the half.

After the break, Claude Puel’s players did all the could to find an equaliser. The Spanish referee did not help by missing a handball in the box after a control by Lisandro and afterwards Antho Réveillère fired over the bar (50’). OL continued to push forward and their number of corners multiplied. From one of them, Toulalan then Makoun came up short against Pepe Reina, but the youngster Max Gonalons had followed into the heart of the box and fired the ball into the back of the net with a diving header (72’). The OL camp exploded with joy! The intensity of the encounter did not drop, on the contrary. Lisandro Lopez came off for Chelito Delgado in the 86th minute. And it was the young Argentinean who delivered OL after a splendid move started off by Miré Pjanic and continued with Sid Govou. Bafé Gomis couldn’t reach the ball, but not Chelito who scored moving OL 2-1 up (91’). Claude Puel’s players had held on well and the 2 600 OL supporters present at Gerland explosed with joy at the final whistle.
[IMG50014#C]