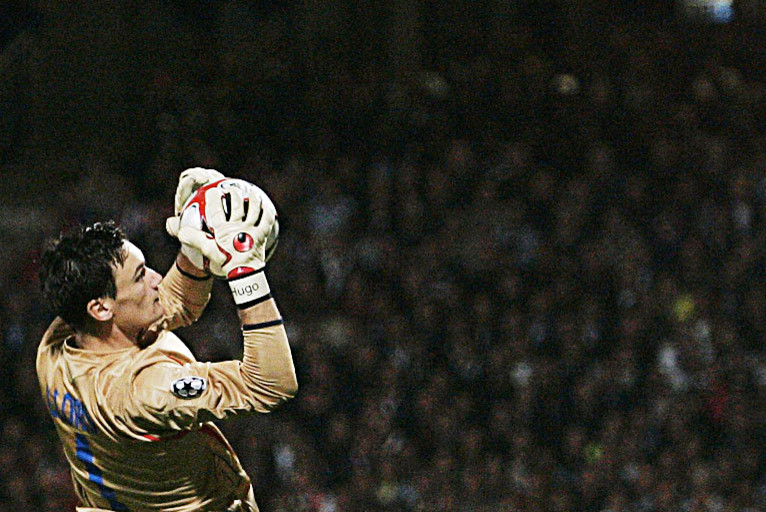 Since the start of the season, the OL keeper has multiplied his number of exploits, like the ones he pulled off against PSG. Hugo has quite simply been putting in world class performances with OL since the start of 2009...
He admitted that he felt a little frustrated at the start of his OL career as he didn’t have much to do and wasn’t decisive when the work did come along. That changed radically when we moved from 2008 to 2009. If his match away to Bayern was almost certainly the most accomplished performance of the first half of the campaign, he then changed things around drastically . Against Nancy, Sochaux, Le Mans, OM, Barcelona in the first leg … the player from the Côte d’Azur layed out, for all to see, the extent of his qualities, with his reflexes, calm and reassuring presence …

[IMG50165#R]Sochaux at Gerland was his masterpiece. Hugo became the Boss of the OL penalty area continually proving to be decisive and never causing the team to drop points. A reproach ? He made it of himself against Barcelona, for not being able to keep them back long enough. Hugo had, however, come back from a throat infection, which slowed down his reactions on the field in Catalunya.

After his 46 matches played... the 19 points saved in the L1... there was no way he could take his time going into the new season. 6 league matches and 6 encounters in which he has been decisive in regards of the final score, avoiding an opening goal for an opponent or allowuing them to get back in the match. Away to Le Mans, against Valenciennes, away to Auxerre, against Nancy, Lorient –what a save with his keft hand on the goal line - and at the Parc des Princes against PSG, Hugo has racked up a number of fantastic performances. Keeping the ball out in every possible manner, he is Hugo the Saviour. This calm « giant » plays with elegance, gives his all to put out the fire before returning to a cool and calm state.

[IMG50167#L]Evidedently, his 90 minutes at the Parc, with a sprinkling of unbelievable saves, should be highlighted : the save on the ground in the opening minute from Clément, his flying save from a Ceara free-kick, his save from a shot by « Ludo » and the firm hand shown to keep out a point blank header from Hoarau. Without forgetting his tackling at the feet of Luyindula or Giuly; the balls plucked out of the air … He did so much, that he did not deserve to lose. His team-mates finally rewarded him by scoring an equaliser! Hugo the Boss became… Jesus for Coupet.

In the Champions League , there was no rest for him against Anderlecht where he ponce again had to pull out some saving graces. The only « quiet » game that he has had was the one against Fiorentina. How could we forget his torrid time with the national team. His unfair sending off against Serbia did affect him, a proof of his formidable maturity exhorted by Grégory Coupet. A solid mentality in an elastic body . Qualities which would count for nothing without the intelligence, hard work, and ambition necessary to ciontinue this excellence, but also this progression. Hugo "a top guy " ...as his coach Joël Bats would say.