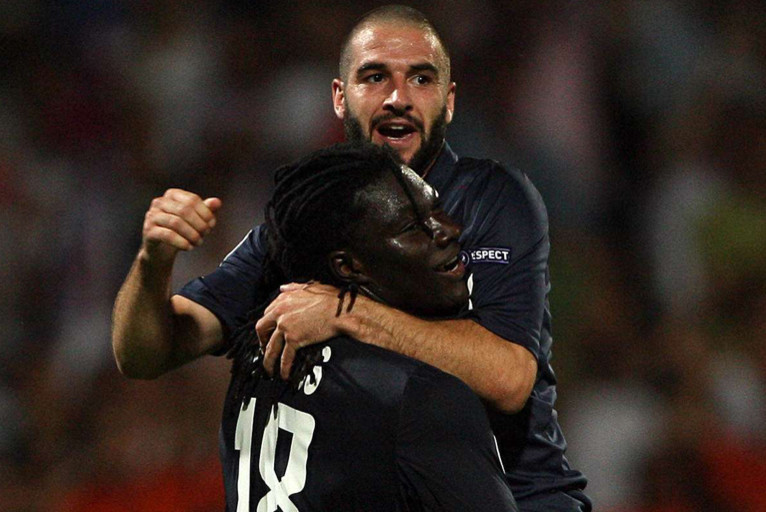 A fantastic evening at Gerland saw OL completely dominate Anderlecht, 5-1. Bafétimbi Gomis and his team-mates have taken out a serious option on qualification for the Champions League.
Complete match statistics!

This encounter in the preliminary round of the Champions League was already considered to be a turning point in OL’s season. The least that can be said is that the atmosphere inside and around Gerland was white hot, and not just because of the blistering temperatures that had hit Lyon throughout the course of the day.

As had been hoped, OL started the match with great desire and hunger. After just a few moments, a cross from Aly Cissokho was headed towards goal by Gomis whose effort scraped the post (2’). Lyon completely dominated the opening minutes of the encounter. After Lisandro had picked up a free-kick, Miré Pjanic stepped up to pass sentence. The Bosnian fired in his free-kick just underneath the crossbar, leaving the Anderlecht keeper no chance (10’). The match became completely crazy. At the very limit of legality, Hugo Lloris threw himself at a Belgian forward inside his penalty area, immediately afterwards « Licha » Lopez broke forward towards goal and was brought down in the Anderlecht box. Penalty! The Argentinean stepped up to take the penalty himself, firing home to give OL a two goal advantage (15’). It didn’t take much more to send the supporters into raptures. After 20 minutes of play, Cris and his team-mates were in just as much control of the match, but were creating less clear cut chances. It was just the calm before the storm. The storm or rather the bolt of lightening fired off by Michel Bastos. Positioned out on the right, the Brazilian turned inside and let fly with an absolute missile from 25 metres out which crashed off the post and into the back of the net (39’). Less than three minutes later, Cissokho and Lisandro linked up on the left wing, with the latter setting up perfectly Bafé Gomis, who was unmarked on the penalty spot. The former Saint-Etienne player did not waste his invitation to take part in the festivities. His side foot effort was placed well out of the reach of the Belgian keeper (42’). 4 - 0 at half time! OL had accomplised a remarkable first half. Gerland was delighted.

On their return from the dressing room, the visitors did their best to get their heads back above water. Legear, a substitute, just missed out on his one on one with Hugo Lloris (47’). Just a few minutes later it was De Sutter who saw his effort pushed out for a corner by the OL keeper. Less cutting, OL suffered a reduction of their lead when Suarez won his duel with Bodmer before dribbling past Lloris before slotting the ball home (58’). Anderlecht’s goal was more than deserved in view of their start to the second period. Kicked back into action, OL scored another goal just a few minutes later. Played in by Bastos, at the very limit of off-side, Bafétimbi went past Proto and slid the ball into the empty net (63’). The atmosphere inside Gerland redoubled in intensity. The OL players were now content to control the match. Replaced by Cesar Delgado, Lisandro was given a standing ovation by the 38 000 supporters of Gerland. Chelito managed to create two great chances and only just missed out on scoring the 6th OL goal (76’). It was then the turn of Bafé Gomis to receive the acclamations of the Stade de Gerland. Five minutes before the end of the encounter, Chelito created anothe huge opportunity but his effort was kept out by the Belgian keeper. Jean II Makoun then tried his luck, but his shot went over the bar (88’). Finally, Chelito, very much in form, saw his close range headed effort saved by a combination of Proto and the crossbar. 5 - 1, the referee Mr Stark brought Anderlecht’s suffering to an end. OL have managed to start their European campaign in the best possible manner.