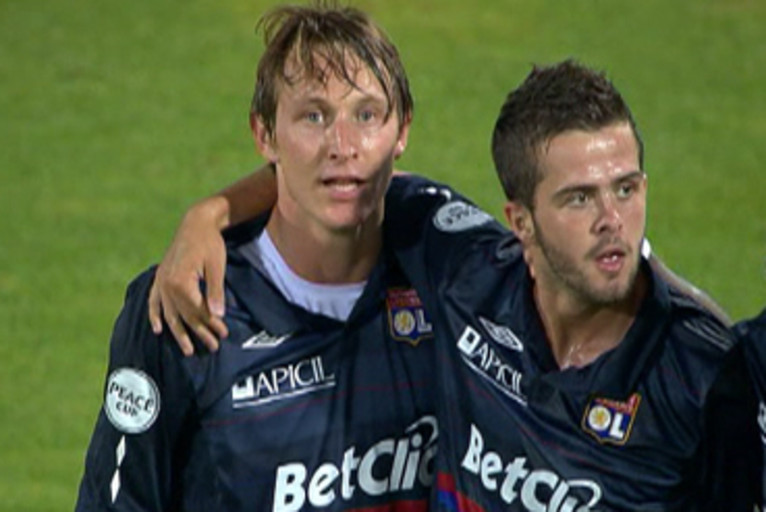 OL dominated proceedings during a large majority of the match and opened the scoring through Kim Källström (69'). Tired out, Claude Puel's men were pegged back at the end of the match with Nobre heading home from a corner (85').
OL kicked off their Peace Cup against the Turks of Besiktas. The encouragements of the few OL supporters were well heard in the Nuevo Colombino stadium in Huelva which as a capacity of 20 000 spectators but today was quite empty.

Claude Puel’s men were wearing their new « european » jersey and quickly showed what they were capable of. After just a few seconds, Ederson broke down the left and fired in a shot that went just wide (2’). Afterwards, it was the turn of Fred Piquionne to crash in an effort that grazed the bar of Rustu’s goal (5’). The Besiktas forward Bobo broke through the centre of the park but an outstanding tackle from Mathieu Bodmer brought the attck to a close (12’). On a counter attack, Michel Bastos took his turn at shooting but once again the ball went well wide of the target (17’) Bastos tried a second effort but this time his effort was weak and Rustu picked the ball up easily (20’). Even if the Turks were not very dangerous at this point the OL back line did not seem to be very solid. Frédéric Piquionne broke past his marker in the centre of the pitch and fired off a cannon ball effort which went just over the bar (30’). On two occasions François Clerc was brought into play down his flank and on both occasions the OL forwards missed his crosses by centimetres (33’). Played in by Bastos, Sid Govou created a huge chance but opened his foot too much in his one on one with Rustu (37’). The first half was brought to a close with the score at 0-0. Kim Källström and his team-mates dominated the proceedings (10 shots on goal for OL against 0 for Besiktas) but were unable to capitalize on their opportunities.

The referee brought the second half underway without either side having made any changes. Following a Fred Piquionne cross, Ederson reacted with a hlf volley, but his effort did not trouble the Turkish keeper (55’). At this point the OL coach decided to change his left flank with Michel Bastos and Aly Cissokho being replaced by Anthony Mounier and Fabio Grosso (56’). With Jean-Alain Boumsong coming off for John Mensah, OL almost suffered a catastrophe from a corner headed on at the near post, but luckily the ball went wide of the goal (58’). OL won an ideally place free-kick at the edge of the box, but Miré Pjanic’s effort crashed into the Turkish wall (65’). Nobre tried an effort from about 25 metres out an dit took a superb full length save from Rémy Vercoutre to keep the ball out (67’). Ederson resisted a tackle on the edge of the penalty area and played the ball to Pjanic who back-heeled the ball instantly to Kim Källström. The Swede controled and fired in a shot out of the reach of Rustu (69’)! OL were 1-0 up! Just a few minutes later, Kim Källström fired in a direct free-kick which crashed into the crossbar (78’)! Anthony Mounier broke down the left and sent in a cross for Sidney Govou who was unable to hit home the ball (80’). During the final moments of the match the Turks pushed hard to try and get back on level terms but a save from Rémy Vercoutre and then the post saved OL on two occasions (83’). Besiktas finally managed to equalise thanks to a Nobre header from a corner (85’). The match ended with this frustrating drawn scoreline, which was however logical in view of all the chances the Turks created in the final minutes.