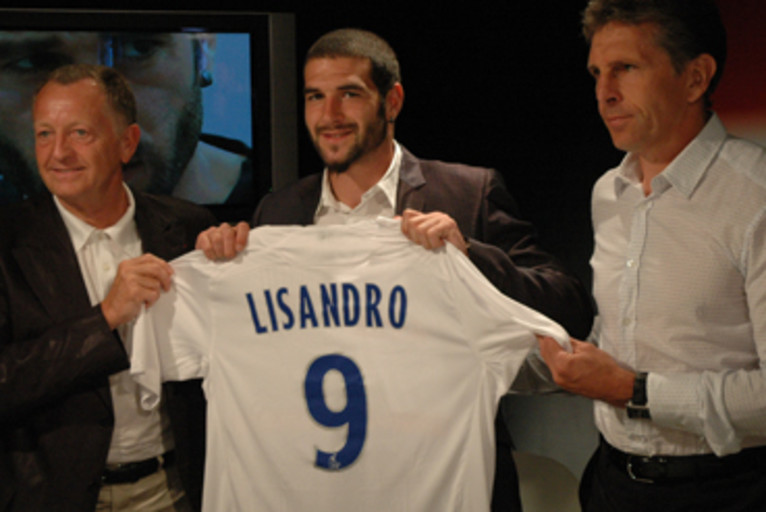 The new OL striker was officially presented to the Press on this day, the 15th of July. The conference took place in the studios of OLTV at 18h30 in the presence of the gathered Media.
The president was the first to speak, for Jean-Michel Aulas and Claude Puel, Lisandro has always been a priority. Negotiations took longer than expected as the president of Porto is a "great negotiator" as the OL president pointed out.

The transfer fee of Lisandro is the largest in the history of the club. The president wished to reply to the criticism levelled at the club concerning the cost of their transfers. He reminded everyone that OL are part of the European market and that investment is needed in order to achieve objectives: it’s just a question of strategy.

What are the clubs objectives for the season? We want to have the best possible and well balanced team in order to be competitive. Before passing over to Claude Puel, Jean-Michel Aulas stated that he wanted to see Lisandro play in the World Cup next June thanks to some great results with Lyon.

The OL coach then vaunted the merits of the Argentinean. As far as he is concerned, Lisandro Lopez is one of the best strikers in Europe , very generous and altruistic with great integration qualities. Claude Puel also stated that the striker’s physical and mental capabilities would allow him to make the difference on and off the pitch.

Before answering questions from the Press, Lisandro Lopez thanked the president, Claude Puel and the whole of the club for the quality of the welcome that he has received.

Lisandro declared that he wanted to live up to all of the hope that has been placed in him. The amount of his transfer fee has not phased him at all, on the contrary it has given him extra motivation. He wants to give the best of himself, as he has always done, and be of use to the team for the forthcoming season and the following ones (Lisandro Lopez has signed a five year contract with OL president Aulas reminded everyone).

Lisandro Lopez has no worries about the French style of play which is reputed to be very defensive. He will fight for and play « every ball as if it was the final one, that will not be a problem » . Lucho Gonzalez, another former Porto player who recently signed for Olympique de Marseille, wished Lisandro Lopez good luck for second place! The new OL player also wished his compatriot good luck in this new step of his career at Marseille but was more cautious stating that they would see who finished first at the end of the season.

The journalists asked Lisandro Lopez about any contact that he had with Aly Cissokho, another Porto player who could be in negotiations with Olympique Lyonnais. The Argentinean declared that he hadn’t spoken to the player recently. Claude Puel closed the discussion about Cissokho confirming that Olympique Lyonnais were interested in this player with great potential. « The future will let us know if it is possible ».

The conference ended with Lisandro receiving his Olympique Lyonnais jersey from the president.
Videos