Claude Puel : "We will listen to Karim" 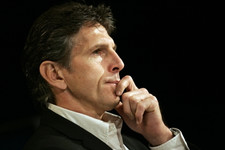 After the first training session of the season, Claude Puel spoke to the gathered members of the Press. A conference where the main subject of questioning was one of the days absentees (the French international players returning to training on Thursday at Tignes): Karim Benzema.
The OL coach was questioned at length about the rumours of the French striker leaving the club: « We know how important he is to OL and his efficiency within the team: he is an exceptional player, but we also know about the financial situation of the club. We’ll speak with him when he returns to training on the 2nd of Jul, we will listen to what he wants. Over the last few months, he has stated that he wanted to stay with us, as we are heading into the season leading to the World Cup. If he feels he wants to leave, we will discuss that with him, there will have to be concrete offers, of which there have been none so far. So, there is no « Benzema problem » as he is still with us. (…) It is said that you cannot keep hold of a player who wants to leave, but with what could be a huge transfer and want away hopes of the player, everything has to be considered. We will look at the situation if it presents itself. That doesn’t mean that he will be leaving OL for sure. For any manager, losing Karim would be a huge blow. If he left we would have to replace him; it wouldn’t be about losing Karim if we manage to bring in one or a few players of his calibre. »

[IMG43384#R]Do OL’s dealings in the transfer market depend on Benzema? « No, we’ve targeted players for specific positions, the profiles have been stored away, this doesn’t depend on any movement within the squad , retorts Claude Puel who goes on to state: we are looking for attacking players who can bring pace and break down opponents as well as being able to play in the spaces between the lines. »

[IMG43476#L]For the moment, OL haven’t recruited anybody, a situation which doesn’t at all worry the manager: « we’re not behind schedule, even if any coach would like to have his squad finalised going into pre-season training and a very important month of August. The transfer market is having trouble taking off apart from the huge transfer made by Real Madrid but things will slowly start moving and taking off over the course of the next few days. We are in discussions with a number of players and their clubs. For the time being, nothing has worked out for a number of reasons. We are very demanding about the type of player who could come in to strengthen what we have in place already. »
Facebook
Tweet
Forum