Grosso with the Italian national side 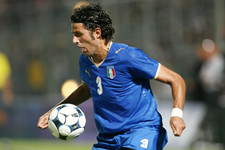 A consequence of this surprise victory for the African champions and the Brazilian win over the USA (3 – 0), is that in the group B, three teams can still qualify for the semi-finals: Brazil, Italy and Egypt.

In group A, Spain qualified for the final four by defeating Iraq (1 – 0). South Africa and Iraq will fight it out for the final ticket to the semi-finals.
Facebook
Tweet
Forum