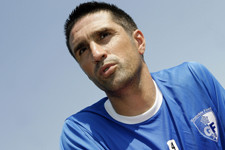 Maxence Flachez will succeed Florian Maurice in the consultancy position on OLTV for the 2009-2010 season.
The former OL, Sochaux, Guingamp, Valenciennes and Grenoble defender will have the task of commentating matches for the channel next season and will also take part in the analysis show « OL System Foot » on Monday evenings.
The 36 year old from Grenoble came through the ranks at OL, playing for the first team in the L1 over three seasons (55 matches and 2 goals). He made his debut at Gerland on the 29th of August 1992 against Olympique de Marseille.
« I wanted to stay involved in football after retiring and I'm delighted to have this opportunity to come back to my first club. I'm looking forward to starting this new adventure. »
Maxence Flachez has just retired after playing his final season for Grenoble (20 matches).