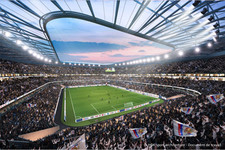 Jean-Pierre Escalettes, president of the French FA. was reassured after the visits that he had already made. He reminded everyone that the application dossiers have to be presented to UEFA at the end of December. The dossiers will have to be watertight as UEFA’s demands are draconian. Nine facilities and three back up facilities are to be visited. He explained why he is optimistic after having seen Lyon’s project: « Lyon’s project is exemplary as it takes into account the development of the city, rebalances construction towards the east and also takes into account global compact. We need projects like that, which take care of our planet, today. Everyone will understand that a great city like this, the second city of France which is looking to be a European capital, needs a sports facility like this.»

[IMG50062#R]Frédéric Thiriez, President of the Football League, is also taking part in this tour of France. «Euro 2016, he underlined, cannot go ahead without Lyon, who have given so much to football over the last few seasons ». He has been impressed by the « OL LAND » project, as he explains: « It’s a magnificent project! I’d go as far as saying that they can be a pilot for what is going to be at the heart of UEFA’s decision, global compact and the protection of the planet …
It’s not a fad but a necessity. The world of football needs to realise that it has to build on these topics.»

Gérard Collomb, Mayor of Lyon and President of Greater Lyon was very satisfied with this meeting. He also proclaimed his joy and his support for France’s candidacy for the Euro 2016 stating: « it is important for its influence abroad » before speaking in greater detail about the project OL LAND. « The amendment by the government permitting the construction of large high level sporting facilities will be voted in June by the parliament. From then on we will be able to revise planning regulations during the assembly on the 6th of July. Our dossier is looking good. The construction permit will be submitted in 2010 and if all goes well the stadium should be delivered during the first six months of 2013, the second half of the year if there are some problems. All that means that we have room to manoeuvre in relation to 2014 when all the grounds have to be ready in France. »

[IMG50061#L]Enfin Jean-Michel Aulas, president of OL, set upon by hordes of journalists who didn’t just question him about Euro 2016 but also about current « transfer »news answered, focusing on sport with a capital S in Lyon: « This law will allow all the sports facilities, whether it be Lyon’s or the others involved in Euro 2016 or any other sports to be able to plan ahead. For Lyon it is the opportunity to become a capital of global compact but also to become a capital for sport in France. There could be the project of the stadium « OL Land » but also a multi sport centre for the ASVEL with the arrival of Tony Parker and also the use of Gerland reorganized for the rugby so that the LOU can make their break into the Top 14. That would mean 3 sports structures at the service of the region which would become a sort of sporting capital of Europe in disciplines other than football. »

A word about the transfer market? L’Equipe, le Progrès, Aujourd’hui en France and France Football are all speaking about Olympique Lyonnais. Names of players who could possibly arrive at OL are regularly mentioned. Vieira, Lopez, Cissoko etc… Jean-Michel Aulas has obviously heard or read these names … : « For the moment things are quite clear, we want to build a great side. There are a number of great players that we are interested in and with Claude Puel in charge, Bernard Lacombe and Rémi Garde are scouting a number of players … All very good players interest us, within our spending power. We’ll have to see what our opponents do but it has to be said that not all of the players mentioned have been approached by us. It’s all a game but confidentiality is imperative in order to obtain the signature of the players that interest us. As we are a company floated on the stock exchange we cannot give out information without it being done publically. »