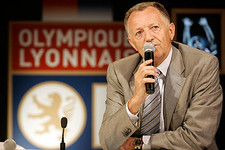 On Friday, Jean-Michel Aulas accorded a long interview to the paper "le Progrès". The OL president spoke about the season which has just finished, Claude Puel, as well as the importance of the new stadium at Décines for OL.
« We expected the players to go further than they did this season , he declares, but we suffered a lot from injuries. There was also a problem of integration ». When asked to elaborate, he mentioned Fred and Fabio Santos. « Fred? He doesn’t exist anymore for me. He did too much harm to our institution. He polluted the atmosphere in the dressing room and out on the field. He was not honest by any stretch of the imagination. I was between Fabio Santos and the coach at Valenciennes, and in my 22 years as club president I have never seen anything like it, so I took my responsibilities. »

Concerning the organisation set up this season around a general manager, Claude Puel (a manager « worth getting to know. An experienced general whose man management is fair »), who « holds the keys », « right now we are building up an advance over our domestic rivals. (…) I’m full of doubts but I want to go right to the end of this story with Claude (Puel), take it all four years ».

The OL president also spoke about the two principle areas of work for the summer: finding a « shirt sponsor », after Accor dropped out, and the summer transfer market. As far as the first building site is concerned, « we are in discussions with a number of sponsors, we haven’t made a decision for the moment as the financial side is not great. (…)OL are the most economically strong club in France; last year, media outfall represented 35 million euros for the Accor group. (…) If we don’t get what we want as far as the shirt sponsorship is concerned, we might try a transitory operation like Barcelona. But, from the 1st of January 2010, online gambling companies will be able to sponsor. So, we’ll see ».

[IMG50047#R]Before speaking of the transfer window, the president is delighted that all the players currently at the club are under contract (« In order for Juninho to leave, we had to let him go »), Jean-Michel Aulas refuses to speak of a big shake up: « because of our financial strength, salaries at Lyon are amongst the highest in the L1. Everyone knows that, apart from those people who benefit from those salaries … That is why it is complicated. But the day that those players will want to leave, the will find out the law of offer and demand. And in order to be sure that you can leave, they have to maybe accept earning less. As we are dealing with gentlemen, there won’t be any problems. In that case, there could be more changes than we thought. (…) There will be changes. Claude will decide. Bernard Lacombe will work very closely with Claude. But the final decision will come from Claude. He will have the necessary transfer funds and will be able to replace Juninho».
[IMG50046#L]He also defends the two OL players recently whistled at Gerland, Keita and Piquionne: « Three years ago, Keita was one of the best right wing players in France. He was again, two years ago. Piquionne moved from Rennes to Saint-Etienne, was called up to the National team, everyone was fighting for his signature. All of a sudden, they are rubbish … (…) How does anyone expect Keita to be able to control the ball when his own supporters are already whistling him before the ball reaches him? We are killing the institution. The supporters are venting their frustration, but just because a few supporters are unhappy, I’m losing out and my player becomes fragile. »

Finally, Jean-Michel Aulas goes over the evolution of the stadium project at Décines, « a huge dossier », an essential project: « we’re losing a lot of money at Gerland. We have to bring in private funding for the costs of the stadium, as is done in Germany, Spain, England. At the moment the laws are not very clear, but some changes are in the process of being made. If the stadium doesn’t happen, a ten-year plan for the prosperity of the club will fall apart. » Can OL change their mind about the choice of the site? « Impossible », affirms the OL president.
Videos