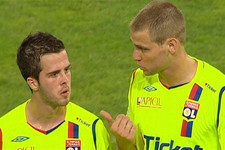 Read all the reactions from the OL camp after the draw away to Toulouse, the final match of the 2008-2009 season.
Anthony Mounier
Our objective this evening was to have fun. This was the final match of the season and there was no pressure on us as far as the league table was concerned, so we just tried to have fun. Obviously things were a little more difficult when we went down to 10 men. They pushed us hard, but the main thing is that we didn’t concede any goals. Bordeaux have put in a great season and they deserve their title. All we can do is congratulate them and tell them that next season we will be back to reclaim our title. Now it’s time for a holiday, it is going to be good to get away from football and to see friends and family.

Jérémy Toulalan
I think we played reasonably well. It’s true that we didn’t create many chances. Toulouse had a few more. They were a little clumsy as they had a number of shots on goal. On the whole, we tried to create and move the ball forward but it was very difficult. Bordeaux are worthy champions as they are the side that has produced the best football this season. It’s good that they won.

Claude Puel
I pleased as we were serious and put in a focused performance. It’s true that in such a situation the players could have given up, but the team showed a lot of solidarity. The second half performance was very good in view of the circumstances. The sending-off is a shame as the referee could have used a little more psychology. I think the match would have been even better at 11 against 11. Bordeaux are a worthy champion, even if Marseille would have been as well. Bordeaux have been very impressive with 11 victories in a row. Mentally they have been very strong as in a number of matches they have been in difficulty. They deserve it, even if we had a role to play by winning in Marseille, so in a way we handed the title to Bordeaux. Together with the president Aulas and Bernard Lacombe we will be working on the squad and recruitment for next season. We will look at the possibilities and prepare well for the next campaign. When you are a manager you don’t really get a holiday …
Videos