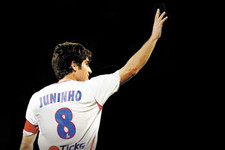 The Brazilian maestro has made up his mind... No longer will we see the number 8 OL shirt as worn by Juninho...
We have come to realise over the course of the last few days that the time of departure had come around . This match against Caen was your 344th in an OL jersey; your last, this penalty, the final goal of your career at Lyon. You had the elegance to reach the bar of 100 goals. You have enchanted us over 8 seasons with your exceptional talent, your professionalism, your kindness, your generosity, your respectful reserve and your phenomenal memory. You also conquered us in the way you spoke, the rapid fire speech a habit of the people from your part of the world, and your desire to make each of your answers as complete as possible.

[IMG32791#R]How could we forget you ? These special moments are to be put in away in the cupboard of memories . « Juni », they won’t pick up dust that quickly. I had the privilege of being present at each of your 344 matches. I delighted in the least of your passes, your dribbling, your fits of anger. I got carried away with each goal. There was a lot of surprise, your free-kick at Bayern against the immense Kahn, the one away to Ajaccio from the middle of the pitch. The goal scored against Marseille at the end of a fabulous twisting run. Your two goal haul against St-Etienne. And, so many others...

Over the course of time, you became the fulcrum of OL’s play, a style of play thought out to accommodate you. You were so often decisive, 1 match in 3! You were involved in 40% of the goals scored when you were on the pitch! 86% of your goals accompanied an OL victory! You won 11 titles. These statistics need no commentary and resume the perfection, the incredible quality of your work for OL.

Simple soldier, captain, you have always been at the top after your two initial seasons on the wings. Mediocrity, half finished work, a drop in form, is just not part of your art of working, or living. You are proud, you have the demands of a champion. You know all about effort and asking yourself the right questions after every performance. You also know what you owe to the team; to those great players who have accompanied you. You stated, a non-exhaustive lsit, « Greg », « Maloude », « Abi, Cris, « Edi », Tiag », Essien, « Djila », Sonny, Karim… You were part of probably one of the greatest midfields that Europe has seen, alongside the Ghanean Essien and the Malian Diarra. You recognized the pleasure taken with Gérard Houllier. You have been immensely happy but also deeply sad, because of the Champions League which slipped ever away from you.

A character ! A special character; the character of a Champion; a character which has made the difference. Sometimes you became tetchy when something annoyed you, and often anxious as matches approached. You hated injustice to such a point that you could often see the red mist descending. [IMG50042#L]« Juni », a graceful and efficient footballer , you also took us to Brazil, in 5 of your 8 seasons, to honour the jersey of the « Auriverde” which you notably wore during the World Cup in Germany in 2006. Numerous journeys … and one very special, more personal one, in April 2005. Unforgettable for me as you took me down the path of your debuts, into your family, in an extraordinary brotherly welcome. Recife... Rio... Vasco Gama... « Juni », the man with the big heart for the children, and the adults, in Brazil and France. "Juni " a huge part in great happiness. You are leaving . You gave your last jersey to a Bernard Lacombe submerged by emotion... a superb emotion, which tells a long story. You had the privilege of being able to choose . Choose, the greatest luxury known to man on earth. Choose, your greatest reward for all these years of work and sweat. I now feel like an orphan, as I did after the departure of « Greg », but also so much richer in having been able to spend so much time with you over the years. Thank you, thank you for everything .
[IMG50043#C]