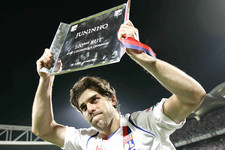 Read all the reactions from the OL camp after the win over Caen.
Juninho
This is an evening that I will never be able to forget. I’d prefer to take advantage of the situation, as the tendency leans towards my departure. Normally, this will be my final match. There is still a chance that I play another season, but there are still some things that I have to think about. If I feel that I can still bring something to the team and the number of matches played don’t matter, then we will see. I still want to play football, but to play at OL you have to have great desire, be ready to suffer and be able to take the side to another level. The supporters are behind us and are still hungry for titles. Even if we didn’t win the title, OL have finished on the podium for the last 11 years, so there are still some positives. I want to thank everyone. It is the supporters who make the club. My family is from Lyon, two of my daughters were born here. It’s up to me to decide about my future and to know if I am still ready to continue doing what I know best.

Ederson
It’s a good thing. We really wanted to win the title but competition was tough this season. We fell back towards the end of the season, but it’s good that we will be in the playing in the preliminary round of the Champions League next year. I hope that Juni and Sidney will still be there next season as they are two players who are very important to the squad. They really represent the club. They have experience and I have learnt a lot from them this season. It’s really great that they scored tonight and that we won.

Bernard Lacombe
It’s a special moment for me. I bought this kid (Juninho) to the club when nobody knew him. He has done a fantastic amount for this club. I think he is THE player who has marked the history of the club when you look at the public reaction. What he has done in the last 8 years is exceptional. When you look at the number of goals he has scored here, decisive goals, which allowed us to win titles. The president has always told Juninho that it was up to him to decide on his future. It seems like he is still hesitating, that his mind is not made up 100%. There is always hope that he will stay an extra year. Everyone present tonight would be delighted to see him stay an extra year.

Sonny Anderson
There is a lot of emotion tonight. Juninho already knew how much the public loved him. Seeing him with his children, the players staying on the pitch for him, the public, the club, all of that, I think it is a very special moment. I think that only he could tell you about it as it comes from the heart. You only realize things once you are not there anymore. I don’t think he wants to leave the stadium. If someone gave him a ball I think he’d go out and play so as not to have to leave. I’m even happier that he managed to score his 100th goal at Gerland in front of the Virage Nord. It’s really symbolic, for him, and for the club.

Cris
It was a difficult match against a side playing for their survival. Caen were sitting back waiting to hit us on the counter, but we kept them back at the start of the match. When we play together we can really do great things. This match and the one against Marseille were superb as far as aggressivity and movement on the pitch were concerned. It’s true that when Juni came off we forgot the match, everyone just wanted to party. We conceded, but then Karim gave us our two goal lead back, which was good for us. Juni is a star, he is a team leader. If he leaves everyone will be sad. We know what he is capable of on and off the pitch, as he is a leader. There is still time for him to change his mind. We’ll try all we can to convince him to stay. We know that he can still play on for another year at the top level. It would be good for Lyon and for French football. I managed to negotiate with the coach, training will be on Tuesday afternoon and not Tuesday morning. My team-mates aren’t happy, they wanted time off until Wednesday, even Thursday …
Facebook
Tweet
Forum