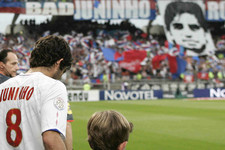 OL were victorious 3-1 thanks, notably, to the 100th and maybe the final goal in an OL shirt for Juninho. Lyon are now guaranteed third place in the L1.
Claude Puel kept confidence with the defence that was victorious against Marseille. The midfield was made up of Toulalan, Makoun and, of course, Juninho who would be trying to score his 100th goal in an OL shirt. Up front, Karim Benzema would be helped out by Sid Govou and Ederson. 30 minutes before the kick-off, the atmosphere at Gerland was already white hot. It was supposed to be Juninho’s final match with OL and Gerland wanted to celebrate.

OL didn’t waste any time in attacking, with Réveillère breaking down the right and crossing for Karim Benzema, who’s left foot effort flew just wide (1’). OL thought that they had opened the scoring through Karim Benzema, but the striker was unfairly flagged offside after a pass from Jean II Makoun (4’). From an Ederson corner, Makoun headed the ball just centimetres wide of Plante’s post (12’). The first chance for Caen fell to Savidan, who fired a left foot shot just wide of goal (15’). Deroin managed to create a chance for himself but Hugo Lloris pushed the ball away with his feet (22’). A corner from Juninho, flicked on by Sid Govou caused havoc in front of Plante’s goal, but the Norman keeper came out on top (29’). Benzema played the ball to Juninho in the box with the OL number 8 being knocked off balance by a defender. Penalty!! Juninho sent Plante the wrong way and scored his 100th goal for OL (35’)! Gerland went wild, with a number of supporters jumping over the barriers! The Brazilian playmaker then tried his luck from a free-kick, but his effort flew over the bar (37’). Savidan took advantage of an error by Makoun but the Norman striker fired his effort out for... a throw-in (41’). The referee brought the first half to an end with the score at 1-0 and the public in Gerland ecstatic!

Back from the changing room, Juninho fired in a free-kick, from nearly 40 metres out, which flew just over the Caen crossbar (48’). Kim Källström took a slight knock but was able to get up and carry on (55’). Karim Benzema tried to curl an effort in on goal from the edge of the box but the ball went well wide (59’). Caen won a free-kick in a good position, but Barzola was only able to hit the ball over the bar (62’). With his back to goal, Ederson won the physical battle with his marker before spinning and shooting on the turn, but Plante saved without any problem (65’). Some great play by Ederson down the left, saw the Brazilian cross for Benzema who was unable to hit the target with his effort (68’). Sid Govou was played in just onside, the OL number 14 controlled the ball and in one swift movement rocketed the ball past Plante (70’)!! It was party time at Gerland! Sidney Govou fired in a cross for Juninho, the Brazilian was unlucky to see his header crash into the post (72’). What a shame! Claude Puel then decided to replace Juninho with Miré Pjanic and suddenly Gerland wells up with emotion (80’). With the OL players a little distracted, Savidan took advantage to score (82’). Benzema escaped down the right, then turned inside and fired an unstoppable effort past the helpless Caen keeper (89’). The referee finally brought the match to an end. Now, it’s time for the party!
Facebook
Tweet
Forum