A champion that never dies! 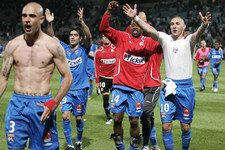 Solid at the back and realistic up front, OL put in the performance necessary to defeat Marseille. This 3-1 victory, comforts OL in third place and puts them in good standing for the qualification to the preliminary round of the Champions League.
As he was not 100% fit, Juninho started the match on the bench, because of this Ederson played a supporting role to Karim Benzema. As has been the case recently Kim Källström occupied the post of left-back. Up front, Sidney Govou got back into the starting line-up after the thirty minutes he played against Nantes.

The atmosphere at the Vélodrome was electric as the two sides stepped out onto the pitch. OL committed a number of fouls during the opening minutes, they did however pick up a free-kick just 25 metres out with Kim Källström firing in an effort but was unable to hit the target (10’). Cesar "El Che" Delgado slid the ball to Karim Benzema who was just onside. The OL striker tried his luck with his left foot but his effort went over the bar (15’). An error from OL allowed Niang to pick up the ball, he fired in a shot which crashed into the post (16’)! OM became emboldened. Valbuena played down the left and tried to curl in a shot but Hugo Lloris was able to save, Brandao followed the ball in but the OL keeper was up to the challenge (17’). Following a corner the ball was picked up by Karim Benzema on the touchline. The OL number 10 turned in and slid the ball to Ederson who was brought down in the box by Brandao (29’). Penalty! Karim Benzema stepped up and sent Mandanda the wrong way (30’)! From the kick-off OM were given a free-kick. Cheyrou found the head of Civelli, but his effort went wide (32’). Niang was played in just onside and his cross, deflected by Hugo Lloris, almost dropped to Lorik Cana but Kim Källström was on the trajectory of the ball (39’). After some great play by Chelito Delgado, Jérémy Toulalan played in Benzema who was played onside by Civelli. One on one with Mandanda, the OL striker doubled the lead with a side footed effort (43’)! Lyon had just dropped OM K.O.! A poor clearance following a free-kick dropped straight to Cheyrou who hit the ball instantly, his effort crashing into the post (46’). At half-time OL’s 2 goal lead was like a thunderbolt on the Vélodrome!

At the start of the second half, Marseille tried to put pressure on OL. Niang fell twice in the penalty area, but Mr. Lannoy did not let himself be fooled (48’). Niang tried a shot on goal, but his effort was blocked by Jérémy Toulalan (50’). Corner. Karim Benzema was then victim of a foul by Brandao (59’). A great free-kick from Valbuena fell to Civelli who, taken by surprise, was unable to get his effort on target (62’). Taye Taiwo crashed in a long range free-kick which went just over the bar (64’). Sid Govou came off, replaced by Juninho (67’). A counter attack led by Karim Benzema saw the ball played off to Chelito Delgado on the right. The Argentinean shot but screwed his effort well wide of the goal (69’). A defensive error from Marseille gave the ball to Karim Benzema, but the striker’s shot was saved by Steve Mandanda (70’)! A poor alignment in the OL defence allowed Niang to play the ball to Nino Wiltord in front of goal. The former OL player placed the ball out of reach of Hugo Lloris and reduced OL’s lead (81’). After a superb one-two with Makoun, Benzema curled in a shot but his effort went agonizingly wide (87’). Juninho obtained a free-kick more than 30 metres out. The OL maestro hit the set piece in himself, beating Mandanda in the process (93’)! MAG-NIF-ICENT! It was all over. Lyon cooled the fever at the Vélodrome with great style.
Videos