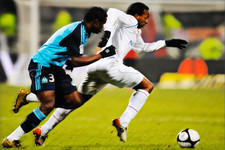 OM are aiming for the title...OL want to hold on to 3rd place...this is a high stake match at the top of the L1 between the two "Olympique's"...the big game of Week 36...
With just 3 matches remaining, Marseille can feel Bordeaux breathing down their necks, with only goal difference (2) separating the two clubs. Lyon have PSG in their rear view mirror, just one point behind. Between OL and OM there are 7 points and a goal average in favour of Cana and his team-mates. OL have lost their title of French Champions, but can « stop » OM from taking the succession. But it doesn’t matter who wins the title, the seven times French champions have their own objectives: remaining in a 3rd place which would give them a ticket to the preliminary round of the Champions League .

When they step out onto the field on Sunday, the Marseille and Lyon players will already know the results of the matches involving Bordeaux and PSG. This will just add extra pressure to stick with the same position or try and build up a bigger gap .

This Marseille side so impressive away from home, 39 points from 54, seem to be a little more fragile at the Vélodrome with 19 points dropped from a possible 51. They have dropped 11 against teams that are right behind them in the table! OL, 19 points dropped at home, have had trouble so far this season against the nine other teams in the top half of the table, having only taken 5 points from a possible 21! But a match like this can change things drastically.

Lyon got back to winning ways against Nantes. The pride of the outgoing champions, the perspective of retaining third place are arguments enough to defeat a Marseille side who have not lost to OL in their last five encounters. OM dream of defeating the, soon to be, ex-champions. Niang has often found the solution. A mixture of fighters and flair players , OM also possess the best attack in the L1. And what can be said about the former OL players Ben Arfa and Wiltord?

In an encounter like this one, OL will need a great Benzema, even if Claude Puel was delighted that other players had managed to score against Nantes. After having gone 481 minutes without scoring, now is the time to make the net bulge. For the rest, the smallest detail can make the difference. This could come from set pieces, or levels of concentration. The formation ? It would be a surprise if OL do not go out with a three man midfield, especially if Juninho is available. What remains to be seen is who plays at full-back and on the wing.

OM v OL? This is always a special match, even more so this season. The ticket for the preliminary round of the Champions League could be picked up at the Stade Vélodrome. The best thing to do would be to grab it as soon as possible.
Videos