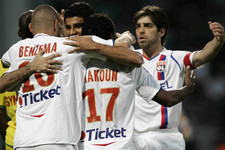 OL got back to winning ways against a weak Nantes side. Two goals from Jean II Makoun and one from Anthony Mounier, added to the comeback of Sidney Govou, delighted the supporters at Gerland.
Claude Puel started with Kim Källström at left-back, in place of Fabio Grosso. Up front, Karim Benzema was helped out by Delgado and Ederson. Juninho made his return to the midfield after recovering from a groin problem. This match also saw the big come back of Sidney Govou who, after 4 months out, was named among the substitutes.

The encounter started off slowly. Going up for a ball in the air, Bekamenga and Cris clashed heads, but both men came out unscathed (4’). On the first real attacking movement of the match, Juninho was played down the wing by Karim Benzema, the Brazilian then crossed the ball to the back post. Ederson picked up on the ball, heading it perfectly to Jean II Makoun who scored with a header from close range (7’). Gerland went wild! Bagayoko was on the receiving end of a free-kick, but his headed effort went well over the bar (13’). From another Juninho, Cris dropped in a lobbed header, which Alonzo miraculously saved (15’). In the aftermath, Juninho curled a shot in on goal, but his effort went a good metre wide of the post. Mareval sent scold shivers down the spine of OL’s supoprters, but his headed effort went just centimetres wide of the Lyon goal (18’). Juninho fired in one of the long range free-kicks, to which he holds the secret. The Brazilians ball dropped on the edge of the six-yard box, with Karim Benzema coming agonizingly close to firing home (26’). On a counter-attack, Chelito Delgado dribbled forward, playing a one-two with Benzema and staying just onside. The "Che" broke into the box and crossed along the ground to Jean II Makoun who doubled the lead (35’). The reaction of the “Canaries” is almost instantaneous, with a powerful effort from N'Daw majestically saved by Hugo Lloris (36’)! Juninho fired in another cannonball of a free-kick from 30 metres out, Jérôme Alonzo punching the ball away as best he could (40’). Half-time came around with the score at 2-0 to OL, a delight for the massed Lyon supporters at Gerland.

The second half kicked off with no changes to the OL line-up, Nantes however replaced Tall with Moullec. Some good work was put in by Nantes, with Moullec trying his luck from the right, but his effort was harmless (49’). Sidney Govou came on for Juninho with Gerland giving a deserved ovation to both players (56’)! Karim Benzema, played in just onside, tried his luck with a left-footed half volley, but his effort flew high over the goal (63’). Kim Källström picked up on a poor clearance by the Nantes defence, crashing in an effort which whistled just wide of Alonzo’s goal (70’). Kim Källström fired in a corner to the near post with Anthony Mounier cutting across the trajectory of the ball, crucifying Alonzo. 3-0 to OL! Sid Govou tried a one-two with Pjanic, then broke into the box but was blocked by the Nantes keeper (85’). The referee brought the encounter to an end, with the Lyon supporters celebrating the large victory that they had so hoped for.
Videos