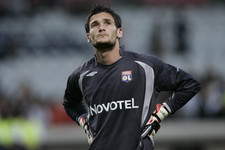 The OL keeper analyses with great lucidity the end of Lyon's season...There is no question of them letting the ticket to the next Champions League slip away from them...
There is no doubt about it, the young man has built up his assurance since his arrival at the club. He seemed much more timid last July; or maybe he just needed to find his bearings at the start of his new sporting life. With a solid training session behind him, relaxing, he takes full advantage of the sumptuous surroundings of the hotel Ermitage as evening descends upon Evian. The lake is in the background, the Alps all around. A terrace, flowers, smells. Dinner is about to be served.

Sitting down, his legs seem to be even longer than they are; his silhouette, more rangy. Hugo exudes an extraordinary serenity. This young man makes you want to talk to him. Intelligent, with great politeness, with respect that comes from education, he has the faculty of getting over exactly what he is thinking. Hugo doesn’t hide when judging or analyzing. That goes for the squad as well as him. « He is very important to the squad … » said Claude Puel recently. His post match analysis is often quite pertinent.

Let’s get back to our surroundings. « It’s beautiful … ». OK Hugo, but the Mediterranean, the Côte d’Azur, Nice? « I prefer it here, there is much more greenery … ». Almost one year ago, day for day, he broke his hand … with OL coming back from a training camp … in Evian. A little more than 10 months after his arrival at OL, he finds himself once again on a training camp, trying to avoid what in his eyes would be a catastrophe. «The season has been disappointing, but we cannot allow it to become catastrophic by losing third place . We’ll see if we cannot finish in 2nd… Obviously, we knew that one day OL would not be champions anymore, but… I came here to progress, by winning titles ». The reasons? « We have dropped too many points at from home. There have been injuries …». A second half to the season which has been tough for the minds, which leads Hugo to say: « I have the impression that I’ve been at OL longer than I really have … ». Rest will not be a luxury, in just a few weeks time.

Decisive on a number of occasions, the native of Nice has «brought» 17 points to the OL total, after having a frustrating debut to his career in Lyon. « I never had a lot to do, but that didn’t stop me from conceding goals ». Then he really got going, clocking up decisive saves and top level matches, notably being handicapped for the return leg against Barcelona. « I could have done better, if I hadn’t been ill beforehand, on 2 or 3 of the goals… ». OL, 2008-2009 version, are not scoring very many goals, so his saves are obviously counted. His performances ? « I think about the team first and foremost. But I can turn to something else very quickly as well. I came to OL in order to progress, to get into a big club. When you play for Lyon, you can really feel that your opponents want to defeat you; that their desire has increased tenfold. It’s very tangible . It’s the same at every match, I didn’t believe it at first, but it’s a fact ».

Happy to be on this training camp ? « Yes. It’s good to get away in order to prepare these four matches which are all going to be complicated. We cannot let anybody down anymore. At Gerland, we will be able to count on our supporters, they are legitimately disappointed but have always been there for us. The squad has always enjoyed being together, there are no problems there. We absolutely must have this ticket to the Champions League ».

One last effort before the break for the guy that Bruno Génésio nicknamed Hugo the Boss, one day in training when he pulled off a number of exploits. Hugo, the unbeatable barrier! A last effort, without taking part in the friendly match against Grenoble. « It was planned. I was able to rest and Rémy to play. The squad was really happy to welcome back Sidney Govou. He is an important part of the squad ». A smile, a look, with his large body unfurling. « I have to get away quickly, otherwise I’ll pick up a fine … ».
Facebook
Tweet
Forum