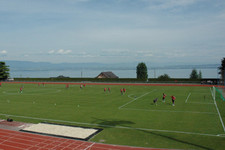 OL defeated Grenoble 1-0...at the end of a match that they dominated from start to finish. The return of Govou was of great note...
May the 8th, Camille Fournier Stadium in Evian; referee, Mr. Mathieu Darbon; approximately 2 000 supporters.

Claude Puel talked with Vitakic ; Paillot with Mounier and Vercoutre; Flachez with Bruno Génésio and Bernard Lacombe… We are just an hour away from kick-off … Time for reunions. A banner from the OL supporters reminds the players of their duties on the pitch! At the announcement of the temas, Juninho and Benzema received superb ovations. Bodmer, with a calf problem and Lloris remained in the stands. Will this team be the one lining up against Nantes, notably with a midfield of Toulalan-Makoun-Juninho?

The first OL shot on goal came from Ederson after some great play from Juninho and Benzema (3’); but it didn’t bother Cattier. Grenoble then managed to pick up a loose ball and worry, momentarily, the defence of the French champions (6’). Some superb technical play by Makoun (13’) wasn’t followed up with a shot to match. A foul on Toulalan (14’) caused some murmuring in the crowd … with Juninho forcing Cattier into a great save. OL were playing better football, without being able to stop Grenoble attacking intelligently with one or two swift counters (18’ and 19’).

Despite great difficulty, Juninho and his team-mates came close to opening the scoring after a free-kick from Juninho (25’) was volleyed by Benzema onto the bar then being cleared by a Grenoble player onto the bar! OL won a number of corners without any success. There was clumsiness all over the place. Another shot from Benzema again missed the target (36’). A ray of light in the 40th minute? A combination between Benzema and Makoun brought a shot from the Cameroon international from 20 metres out was aved acrobatically by the Grenoble goalkeeper, then a cross from Delgado was tamely fired in by Ederson. 0-0 at half-time , despite a great amount of OL pressure, proved again by a shot onto the crossbar from a blocked Paillot clearance. Paillot was then injured, being replaced by Robin.

There were changes to the OL playing staff…but none for Grenoble. Cattier saved a Piquionne effort (47’) before Govou tried an overhead kick with only his second touch of the game. And it was « Sid », full of energy and appetite, who won a corner from which Makoun placed a header just wide of the goal. In the following moments, a cross from Govou found Mounier who played it on to Pjanic, who scored (54’). Finally a goal for OL.

4 minutes later, a cross from Réveillère found the Bosnian again, but the second goal was missed by a whisker. There was only one team in form on the pitch, in the image of Pjanic who played a corner in for Grosso to volley in a superb effort which was saved by Cattier. With the entries of Clerc and Keita, Govou moved behind Piquionne and Pjanic dropped back to line up with Makoun. Apart from a Grenoble free-kick, the French champions continued their domination trying in vain to make the score heavier.

Just as they had in the league, OL took the measure of their neighbours. Claude Puel noted that Govou had managed to play without fear and the desire of Mounier and Pjanic. On Saturday, the OL squad will have an afternoon training session.
Videos
Facebook
Tweet
Forum
Videos