OL lose in the north 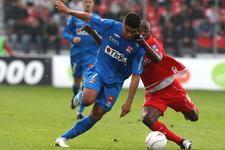 Claude Puel's players failed to exist against a defiant Valenciennes side, losing the match in the space of six minutes through two goals from Johan Audel (23' & 29').
With Jean II Makoun suspended and Juninho out through inury, Claude Puel started with a midfield made up of Jérémy Toulalan, Fabio Santos and Mathieu Bodmer. Up front Anthony Mounier and Ederson were on the wings in support of Karim Benzema.

Mr Piccirillo brought proceedings underway just as the Stade Nungesser was finishing filling up. The attendance was roughly around 15 000 spectators. Fabio Santos tried his luck from the edge of the box, but his effort was saved without trouble by Penneteau (4’). The tackles were already flying in, with Bisevac severely charging into Karim Benzema’s back and picking up a yellow card for his troubles (15’). Ederson fired in a good cross for Benzema who tried to get his head to the ball but was unable to keep the ball down (19’). OL messed up a 3 on 1 chance and on the counter attack Audel then Tienne came close to making Lyon pay (21’). Claude Puel’s men appeared to be completely absent when Valenciennes played in a long throw. Audel took advantage of this and broke through on goal, firing a left foot shot past Hugo Lloris (23’). Jérémy Toulalan lost the ball in the middle of the park and in two passes Audel was played in perfectly and was able to beat Hugo Lloris for a second time (29’). The match became seriously compromised as far as OL were concerned. Benzema tried an effort from the edge of the box but it was easily picked up by Penneteau (40’). Toulalan slid the ball to Ederson who broke into the box but his right foot shot hit the outside of the post (45’). Audel wrought havoc in the OL defence once again, but this time around Lloris won the duel (45’). At half time, the score stood at 2-0 to Valenciennes.

The second half kicked off with Fabio Santos and Mathieu Bodmer having left the field, replaced by Kim Källström and Cesar Delgado. Danic crossed to Audel, completely unmarked in the box, but the Valenciennes striker saw his header fly over the bar (50’). Kim Källström intercepted a loose ball land fired in a left footed effort which was deflected out for a corner (56’). OL seemed to be very nervous and were taking their time getting into the match (60’). Valenciennes were making all the right choices with Bangoura seeing a shot on goal blocked by Cris (63’). Karim Benzema carved out a great chance with a left foot shot at the conclusion, but Penneteau was able to pick the ball up at the second attempt (67’). Pujol tried to fire in a volley, but screwed his effort wide (83’). Lyon just couldn’t seem to get anything right. The match was brought to an end and for the third time in a row OL failed to score the slightest goal.
Facebook
Tweet
Forum