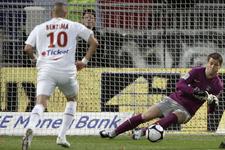 OL went through highs and lows against a solid PSG side, but still didn't benefit from that little bit of luck which could have given them a victory and all three points.
Claude Puel came up with a few surprises for this match against Paris. In attack, Karim Benzema was supported by Mathieu Bodmer with Miré Pjanic and Anthony Mounier taking care of the wings. At the back, Kim Källström stepped in for Fabio Grosso who was suffering from gastro-enteritis. The atmosphere in the ground before kick-off was just fantastic and went up crescendo as the game approached.

The animation in the stands before kick-off is quite simply magnificent. Mr Layec gets the match under way and Paris immediately put OL under pressure. It was, however, Lyon who were the first to shoot at goal with a header from Pjanic after a great cross from Anthony Mounier (3’). PSG replied almost immediately, Sessegnon firing in a fizzing cross which Ludo Giuly headed towards goal (6’). Jean-Alain Boumsong then saw his header saved by Landreau after a corner from Juninho (10’). Karim Benzema was played in deep but taking too long to control the ball, he was unable to follow up with a shot against Landreau (11’). Anthony Mounier turned well and tried his luck with a left-footed effort, but his shot was too weak to worry the PSG keeper (15’). Juninho fired in a good shot from around 30 metres out, but the Brazilian’s effort did not trouble Landreau (22’). Benzema broke down the left, playing a one-two with Mounier, before shooting, but his effort went just wide of the goal (30’)... Turning with the ball, Mathieu Bodmer took his turn at shooting but the ball flew well over (33’). Juninho received a yellow card for a foul on Sessegnon who broke forward on a counter attack (34’). OL were pushing their opponents hard. Clerc saw his cross cum shot cleared by the PSG defence put Pjanic recuperated the ball and played Toulalan in perfectly, but he was only able to fire over (37’). Juninho forced Landreau into tipping the ball over his crossbar with a shot from20 metres out (43’). Kim Källström flung in a corner which Benzema headed at goal, but his effort was stopped by the arm of Jérémy Clément (44’). Monsieur Layec deciding that there would be no penalty. Some things would appear to never change... The referee then brought the half to an end with the score at 0-0.

The second half kicked off at break neck speed, with Antho Mounier breaking down the left wing, he moved into the box but took too long before crossing (46’). A Juninho free-kick was cleared by the defence only as far as Kim Källström who fired in a right foot shot, the ball bounced around in the six yard box but Karim Benzema, taken by surprise, was unable to stab the ball home (52’). Hoarau was played in just onside with the entire OL defence standing still. The PSG striker went to shoot but Hugo Lloris came out to save impeccably (57’)! Sessegnon threw himself into a tackle on Boumsong with his feet up, only picking up a yellow card where a red seemed more appropriate (62’)! The KO seemed to be close (68’). Miralem Pjanic let the ball pass him by, letting François Clerc surge forward, move into the box and crack a shot in on goal, but Landreau was able to block the ball at the second attempt (71’). What a shame! Ederson was then brought on in place of Miré Pjanic (76’). Some brilliantly team play from OL was finished off by a powerful shot from Bodmer which was wel picked out of the air by Landreau (78’). A superb Juninho free-kick slightly right of centre zeroed in on the top corner of Landreau’s goal, but the keeper was equal to it (80’). Juninho teamed up with Benzema, who broke into the surface crashing a shot into the post with Landreau beaten (84’)!!! Luyindula tried his luck from the edge of the box, but his effort did not trouble Lloris (89’). The match finished up at 0-0, but the quality of the encounter was high despite the scoreline.