A battle between title chasers 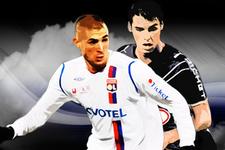 After losing their first place in the table, OL have a fantastic chance of bouncing back away to Bordeaux. It is the moment for ambitions to be made clear...on one side as on the other...
Without being condescending to Lille, Paris and Toulouse, the title will most likely be played out between Marseille, Bordeaux and Lyon. A good thing, as the latter two sides will be up against each other with just seven games to go and one point between them in OL’s favour … OM are in first place, just one point ahead of the seven times French champions.

On Sunday evening, will this top level match be a good indicator of what is likely to happen in the near future ? 4 victories in a row, 0 goals conceded in 337 minutes, 10 goals scored with chilling efficiency: 1 goal from every 6 shots in the last 4 matches; 5 following set pieces … here is a Bordeaux’s recent record of play, despite having to do without Cavenaghi and Henrique. Bordeaux are now moving forward with clear intentions . They have the chance to overtake a Lyon side that they have twice finished runners-up to (2005-2006 & 2006-2007). Is this their time? Everything seems to indicate towards the positive for this side that loves to play attractive football.

OL once again dropped points at home, this time to Monaco, which obliges them to bring back as many as they can from their away games. In this run-in to the seasons end they will have the chance to try and do this, with trips to Bordeaux, Marseille and Toulouse! Bordeaux, where OL are unbeaten in the L1 since the 98-99 season, despite there having been high stakes and intense matches there in the meantime. On each occasion, they have managed to negotiate their way through proceedings. With at least one point … three at best, they would be able to leave Gourcuff et al just behind, or distance them, while hoping that Marseille slip up against Lorient.

« So as not to suffer, we need to quickly make the difference in this match ». In short, Karim Benzema has given the solution on how to beat Bordeaux, while at the same time knowing that OL will have to be more efficient going forward, and in defence, than they were against Monaco. They will also have to be wary of conceding any sort of set piece to Bordeaux, they are specialists in this field, even if OL are as well. This match will pit Gourcuff and Wendel against Juninho; the Brazilian never having scored against Bordeaux. OL will have to watch out for Bordeaux’s strength in the air ; the most efficient in France. The physical battle ? This goes without saying when you are up against athletes like Diawara, Diarra, Fernando or Chamakh… But, OL have enough on their side as well with Boumsong, Cris, Toulalan…

If Bordeaux’s tactical formation is pretty much well known to all, could OL’s be any different to a midfield with three players? Who would bet against Benzema moving back to centre forward? Who will play at right back, and which players will take care of the wings?

This is a big match between two legitimate pretenders to the crown. Two pretenders who have not been in great form against their other direct opponents for the title so far this season (OM, TFC, Lille). If we include the first encounter of the season between the two clubs, OL have taken 8 points from 18 possible and Bordeaux 8 from 27. Who will profit from this huge game ? OL would certainly have grabbed an affair if they were the « chosen ones ».
Facebook
Tweet
Forum