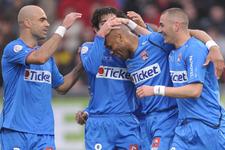 Realistic and in full control, Claude Puel's men were victorious away to Le Mans, 3-1, thanks to a goal from Jean-Alain Boumsong and two from Karim Benzema who has rediscovered his goalscoring touch.
OL are back in action in the L1 after a two week international break. Claude Puel was without Jérémy Toulalan who picked up a knock to the 5th metatarsal bone in his left foot after the match between Lithuania and France. Mensah, Fabio Santos, Delgado and Govou were all also out through injury. Mathieu Bodmer started in the midfield for the first time of the season.

Following a corner, Fabio Grosso dropped the ball to Anthony Mounier who tried a volley but his effort was too high to worry Pelé (4’). Lamah was played in well at the heart of the box, a little to the left of centre, tried is chance but Hugo Lloris was able to save (7’). Juninho fired in a free-kick ideally placed out on the left, but it was of no danger to the Le Mans keeper (15’). From an OL corner, which was poorly cleared by the Le Mans defence, Makoun played the ball off to Jean-Alain Boumsong who hit a left foot shot past Pelé (17’)!! Jean II Makoun then came close to playing the ball past his own keeper when blocking an effort from Camara (22’). Frédéric Thomas fired in a great volleyed effort which was heading for the top corner of Lloris’s goal, but Jean II Makoun was positioned on the line and able to save his side (30’). Le Mans pushed on hard with Coutadeur firing at goal but Hugo Lloris was able to push the ball away with his feet (31’). OL were being knocked around but were able to pick themselves up by the end of the first half. Played in by Makoun, Ederson moved out of the way to let the ball drop to Karim Benzema behind him, who then fired off a shot that flew into the goal off the post (44’). Mr Malige brought the half to an end with the score 2-0 to Lyon, an OL side which had been very efficient.

Claude Puel’s men continued playing with all they had after half-time. After a one-two with Benzema, Jean II Makoun crossed for Juninho to volley, but his effort was well saved by Pelé (49’). Hugo Lloris was in brilliant form when Maiga headed at goal from a Coutadeur free-kick (52’). Once again brought into action, the OL keeper dived bravely at the feet of Lamah, with the referee blowing for a penalty, only to change his mind after consulting his linesman (55’). Kim Källström and Miré Pjanic came on in place of Anthony Mounier and Mathieu Bodmer (57’). The Swede immediately signaling his presence by firing in at goal, Pelé pushed the ball away the best he could, Pjanic then picked up on the ball crossing it to the head of Karim Benzema who scored his second goal of the evening (57’)! Le Mans reduced the score through Le Tallec who picked up the ball at close range after a mix up in the OL six yard box (77’). Kader Keita tried his luck after a back heeled pass from Karim Benzema but was unable to hit the target. The referee brings the match to an end! OL are certain to hold on to first place in the L1 at the end of Week 30.
Videos