Barcelona were too strong 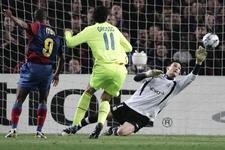 OL suffered as they have rarely done in a European encounter. Down 4-0 in the first half, Lyon managed to reduce the score line just before the break and regained hope on coming back to 4-2, but Barcelona's superiority was undeniable.
Claude Puel retained François Clerc at right-back for the return leg against Barcelona, despite the fact that he had only played one match since his return from injury. Up front, Karim Benzema was alongside Chelito Delgado.

The teams stepped out onto the mythical pitch of the Nou Camp to the strains of Barcelona’s hymn. The Catalans had complete possession of the ball but were unable to approach Hugo Lloris’s goal (4’). Picking up the ball from a long throw, Messi tried to dribble past Boumsong but the OL defender was able to win his duel (8’). Cris brought down Iniesta at the edge of the area, provoking a free-kick (13’). Xavi’s free-kick was deflected by Ederson flying just wide of the goal (14’). A poor clearance from Grosso was picked up by Eto'o, but the striker was unable to hit the target (15’). The pressure Barcelona were piling on was intense and after a great one touch movement Messi hit an effort just over the bar (16’). The first OL incursion came with Benzema going down the left wing and hitting in a cross for Ederson whose effort went wide (20’). Benzema was played in deep, but wxith Marquez tracking him he was not able to hit the target (21’). Marquez then intercepted the ball, playing in Thierry Henry, just on-side, who fired past Hugo Lloris (26’). Despite being clearly off-side, Henry was played in by Xavi and was able to slide the ball under Lloris (28’). 2-0 for Barcelona and things were looking very complicated for OL. Leo Messi broke forward, going past two defenders. The Argentinean played a one-two with Eto'o, before firing home a left footed effort (40e)... Henry dropped the ball to Eto'o free in the box, Cris who was too far off was unable to stop the Cameroon international rocketing a shot past Lloris (43’)! A corner from Juninho was headed home by Makoun reducing the Barcelona lead just before half-time (45’)! At half-time,OL at 4-1 down had rarely suffered as they had in this first half.

Returning for the second half, François Clerc was replaced by Mathieu Bodmer, with Jérémy Toulalan moving to right-back. Delgado broke down the right, resisting the return of Silvinho, before crossing towards the penalty spot. Karim Benzema let the ball run to Juninho who placed the ball out of the reach of Valdès (48’)! The tension rose and tempers frayed on the pitch. Henry, once again played in at the limit of off-side, tried his luck but this time Lloris was able to push the ball away with his feet (58’). Källström was then brought on for Delgado (61’). Lyon at this point of the match had great difficulty in approaching Valdès’s goal (75’). After some superb play by OL, Toulalan played the ball off to Benzema who hit a left footed shot, but his effort flew high and wide (82’). Barcelona did not sit back content with the score-line and carved out yet another opportunity through Bojan but Lloris was able to save (90’). Alves, after receiving a knock from Grosso, went down to the ground. Juninho was not pleased with the reaction and made his thoughts clear to the player and the referee, earning himself a red card for his efforts (90’)! Keita picked up the ball breaking behind the OL defence and after going past Lloris slid the ball into the empty net (95’).

OL leave the Champions League on the back of this heavy defeat against, without much doubt, the best team in Europe at the moment.
Videos