Pull off a GREAT upset 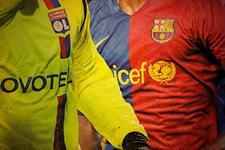 A qualification for OL at the Nou Camp would write a great page in OL's European history...It is up to the Lyon players to believe in their chances, despite the problems of form or absences of certain players...
« Playing against Barcelona at the Nou Camp is just fantastic. You have to go there without fear … ». Words of wisdom from Grégory Coupet just a few hours before the return match. « Greg » knows what he is talking about. He has played there with OL and Atletico. The last time he conceded 6! Certainly OL are out of the competition as they step out onto the field, just like last season when they played Manchester United at Old Trafford. But quite frankly, even if the French champions had won 1-0, it would not have changed anything when you look at the mentality of Messi and his team-mates. Whatever the scenario, they play their way; an attacking game which wears their opponents down. So OL will have to score … they would have almost certainly had to score even if they had won at home.

Since the first leg, Barcelona have a well balanced, if not brilliant, record : 1 win, 1 draw and 1 defeat. The 4-3 defeat to Atletico Madrid set tongues wagging. But, by winning on Saturday night, Barcelona put an end to a 5 match run without a victory. Also since the first leg, questions have been asked about the value of Victor Valdés, but these questions have been hanging around for a long time, he is a « bizarre » goalkeeper. Since the trip to Lyon, Iniesta has returned to the squad, with an importance that is well known and proven in the Liga against Athletic Bilbao; a match which ruled out the captain Pujol. The « old » Brazilian Sylvinho should line up on the left hand side of the Barcelona defence, as Abidal is still out through injury.

If Messi et al have returned to winning ways, OL played out at the Stade de France a fourth match in a row without a win (2 draws and 2 defeats). An elimination from the Coupe de France and 1 single point taken in the L1! This is worrying for the end of the season. Worrying, just like the obvious lack of realism … once again, in other words 21 goalscoring opportunities « missed » over the last 4 matches. Without even mentioning the 7 goals conceded. Worrying, as bad luck has once again hit the squad. Mensah is out. Benzema, having picked up a knock, just like Boumsong. Lloris has also had some slight health problems. Clerc and Bodmer have both returned to the squad much quicker than had been imagined. Can they play two high level matches in a row after having been out for so long? Cris manage dit last season in the same conditions as Clerc. A come back game at the Stade de France … against Lille before the encounter with Manchester.

Claude Puel would have wanted to go to the Nou Camp without all of these problems. But, there is no use crying over spilt milk. This match has to be played taking into consideration all the possible, favorable, scenarios. Will the tactical plan be the same at the start? Will they have to ride the storm, giving them time to see what happens, as was the case against MU? Why not, as long as there are no regrets at the end of the day like in Manchester. Everyone seems to be in agreement that OL will have goalscoring opportunities. Let’s hope so. It would be a great first to make it happen at the Nou Camp.

OL have the chance of pulling off the great upset of their history in the Champions League in the majestic Catalan setting. If we said that we would love it, if it happened, you would have no trouble believing us.
Videos