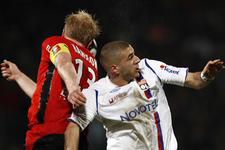 After having opened the scoring through Källström (66'), OL thought they had done enough to win the match,but they did not count on the combativity of Rennes who managed to equalise in stoppage time (93') through Briand.
Claude Puel did not make any great changes to the OL starting line-up, with only Kim Källström coming in for Jean II Makoun in the midfield. Very efficient on Tuesday against Barcelona, John Mensah once again started at right-back.

The match kicked off under light rain, with both sides playing cautiously at the start. Kim Källström was the first player to try his luck, but his weak effort caused no problems for Douchez (9’). Briand took his turn but was unable to hit the target (14’). Following a corner from Juninho, Cris was only able to head well over the bar (19’). Danze then picked up the ball about 25 metres out from goal, but his shot was well picked out by Hugo Lloris (22’). A freekick from Juninho, which was slightly deflected, was no problem for Douchez who was not taken by surprise (24’). Benzema was knocked off balance by Hansson, who was the last defender, but Mr. Kalt signalled play on (30’). Keita threw himself at a Källström cross but missed the target (33’). After a final chance for Benzema following a Källström cross, an unspectacular first half was brought to an end with the score level.

Straight away in the second half, OL carved out a chance following a long run by Benzema who then played in Ederson, but the Brazilians shot went just wide of the Rennes goal (47’). Rennes themselves managed to create chances with Briand, played in just onside, going past Lloris but being stopped by a great last ditch tackle from John Mensah (49’)! Tackling became more and more evident and much tougher. OL then put together a great move, with Keita crossing to Benzema who played the ball off to Ederson on his left. The Brazilian tried an effort with the outside of his right boot, but failed to hit the target (54’). From a Cheyrou free-kick, headed on by Bocanegra, the Bretons create a fantastic chance, but Hansson fired just millimetres over the bar (58’). Makoun and Pjanic then came on for Juninho and Ederson (61’) just as the rain doubled its intensity. Karim Benzema took the balla round Hansson in the Rennes penalty area, but his effort was cleared by Douchez (64’). What an opportunity! The match started to get carried away. Hugo Lloris pulled off a fantastic point blank save after a shot from Briand (65’). Benzema played in Pjanic, just onside, and the former Metz player passed the ball perfectly to Källström, all alone and the back post. The Swede took all the time necessary to control and then fire the ball into the back of the net (66’). The Breton reply was immediate with Briand, in an offside position, coming up in a one on one with Lloris, but pulled his shot wide (68’). Karim Benzema then picked up a knock to his back (73’). Benzegoal had to leave his place to Piquionne and came off the pitch on a stretcher (76’). OL were doing all they could to hang on to the result at the end of the match. Breaking the offside trap after a pass from Hansson, Briand lobbed Lloris and scored the equalising goal for Rennes (92’). The dismay in the OL ranks was plain to see!

Even if it is annoying to concede a goal in stoppage time, the draw was probably the right result taking into account the physiognomy of the match. However, Claude Puel’s players have once again dropped points at home and see their direct opponent’s close in on them.
Videos