OL have the right level 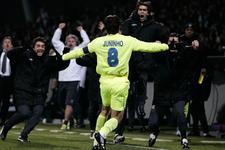 OL opened the scoring through Juninho (7') in an exciting first half where Lyon created the best chances. In the second half Claude Puel's men suffered and conceded an equaliser, scored by Thierry Henry (67').
It is D Day for this huge Champions League match. Claude Puel chose a 4-3-3 formation. John Mensah is back in the team at right fullback after the racist episode that surrounded the match against Le Havre. The Stade de Gerland is full to the rafters and everyone is expecting a show, notably thanks to the presence of the competitions two top scorers Benzema and Messi.

OL wear their, now, traditional fluorescent yellow jersey, while Barcelona wear their home shirt. The atmosphere in Gerland at the kick-off is just UNDESCRIBABLE! Xavi looks to quickly play in Henry, but the striker is a little short and Hugo Lloris is able to sweep up the ball well (3’). OL win a free-kick wide out on the left. Everyone is expecting a cross, but Juninho surprises all present by shooting directly at goal!!!!! The ball hits the back of the net and Gerland explodes (7’)!! Karim Benzema takes advantage of a slip up by Marquez to go one on one with Valdès (10’) but his effort is deflected by the return of Pique and goes just wide of the post! The noise levels at Gerland rise once again! Makoun tries to fire in a shot after some great passing play by OL, but his effort misses the target (12’). A superb pass from Messi for Eto'o, see’s the striker hit the post in his duel with Lloris (14’)!!! Benzema flies past Marquez and his cross, deflected by Valdes, is picked up by Keita, but the Ivory Coast international hits his shot into the ground and it goes wide (16’). The Catalans are controlling the ball, with 63 % possession (24’). Xavi hits a free-kick from about 25 metres but his shot goes over the bar (24’). Following a pass from Makoun, Benzema pick p the ball and turns as fast as lightning, only to see his shot hit the post with Valdès completely beaten (27’)!!! After an OL corner, with Barcelona unable to clear the ball from their box, Makoun tries to take advantage but his effort goes just wide (29’). A cross from Alvès, slightly deflected by Grosso flies to Busquets in the centre of the box, but, surprised by the ball, the player misses with his header (40’). The half is brought to a close by Mr Stark with the score at 1-0 to Lyon, who have delighted the fans present at Gerland. What a half!

The second half starts of at the same rhythm as the first, with Barcelona monopolising possession. Dani Alvès tries his luck from a free-kick, it is deflected off of Grosso, but Lloris, despite being wrong footed, pulls off a great save (57’). Juninho fires in yet another long range free-kick and Valdès, lacking serenity, is able to pick up the ball at the second attempt (60’). Pique heads towards goal following a corner but Lloris pulls off another magnificent reflex save (66’). Barcelona win another corner which is flicked on at the front post by Marquez towards Thierry Henry, who throws himself at the ball and equalises at the back post (67’)! Ederson then Juninho come off for, respectively, Delgado and Källström. Both team’s have put in such efforts that they find it difficult to get anywhere near their opponents goal (80’). OL keep firing in crosses, but there is nobody in the area to get on the end of them. The referee brings the game to an end with the score at 1-1.

OL can have some regrets when they look back at the number of chances that they created, especially in the first half. Tired out in the second, it is logical that Claude Puel’s men conceded an equaliser. Everything remains to be done in the return leg at the Nou Camp in two weeks time.
Videos