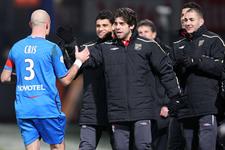 Without Benzema, Juninho, Grosso and Ederson, all on the bench, OL played a perfect first half opening the scoring through Cris (19'). In the second half, Nancy could have equalised but Lloris saved Hadji's penalty before Benzema killed off the match in the final seconds.
As was expected, Claude Puel decided to rotate his squad in view of next Tuesday's match against Barcelona. Grosso, Juninho, Ederson and Benzema all started the encounter on the bench. Tonight, OL's fullbacks were Källström and Gassama. In attack, Frédéric Piquionne partenered Anthony Mounier and Cesar Delgado.

The game kicked off in front of a full house at the Stade Marcel Picot. Claude Puel's men had complete control of the ball at the start of the match. Kim Källström fired in a cross cum shot which was picked up by Bracigliano without any trouble (4'). Chelito Delagdo then tried a half volley, but his effort flew harmlessly over (6'). Kim Källström's free-kick was flicked on by Cris, but his header hit the Nancy post (12'). After some great play from Mounier, Chelito fired on goal once again but missed the target (13'). Mounier scored after a pass from Makoun but the OL left midfielder was sanctioned for a foul (16'). From a Chelito Delgado corner, Boumsong flicked the ball on to the back post were Cris stormed in to head home (19')! Lyon logically open the scoring. Just afterwards, "El Che" Delgado came close to doubling the score but the Argentinean found Bracigliano in his way (22'). The Nancy defence looked decidedly shaky during the start of the game. Delgado played in Pjanic who tried to fire a right-footed effort but missed the target (32'). Cesar Delgado broke through all alone but at the end of his run he pushed the ball a little too far forward and was caught just at the last minute (44'). The half-time whistle came with the score at 1-0 to Lyon.

From the start of the second half, Nancy were much more spirited and won a penalty following a foul by Lamine Gassama on Brison (49'). Hadji stepped up but Hugo Lloris saved his penalty (50')!! The action continued and Féret then crashed into the OL keeper! Following a Delgado pass, Pjanic controlled and followed straight up with a shot on goal, but his effort went just wide (56'). Chelito lacking match fitness was then replaced by Juninho (58'). Just a few minutes later, it was Karim Benzema who came on in place of Fred Piquionne (66'). Juninho then took a free-kick slightly off centre, the Brazilian pulled the ball back to Benzema who shot but his effort was blocked on the line (85'). On a counter attack, Hadji is played into the box but messed up his effort completely (88'). Nancy were going all out to get back into the match and after losing the ball, Makoun played Benzema through on goal. Winning his one on one with Bracigliano OL's number 10 fired home (92')! Juninho fired in a last free-kick which, deflected by the wall, hit the post (94').

A fantastic win for OL, just three days before their match against Barcelona. With yet another win away from home, Juninho and his team-mates maintain the pressure on their direct opponents for the title.
Videos