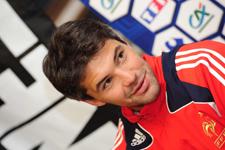 5 of OL's 7 international players were in action last night.
France - Argentina: Jérémy Toulalan played the entire match and was, as usual, impeccable in his tackling. Karim Benzema came on in the 65th minute, in place of Anelka. A certain number of the Marseille crowd present at the match lacked respect and whistled the entry of the OL player. Hugo Lloris and Jean-Alain Boumsong were unused substitutes.

Kim Kallström took part in the full 90 minutes against Austria. Sweden didn’t have to get out of first gear beating a timid Austrian side 2-0. Kim Kallström scored the second goal of the match in the second half, a free-kick from 18 metres out. His effort flew in just under the crossbar.

Kader Keita was in Izmir with the Ivory Coast who drew their match against Turkey 1-1. Keita came on in the second half in place of Guy Demel. The OL man played in a number of passes to Drogba. He even came close to scoring in the 70th minute and his performance was praised by numerous observers. Drogba equalised for the « Elephants » in the 92nd minute.

Finally, the French u-21 side was in Sousse, Tunisia, for a friendly match as part of their preparation for the Euro 2011. Lamine Gassama played in the second half, coming on for Nestor when France were down by one goal. His entry plus that of Obertan brought some fresh legs to the French side that equalised in the 52nd minute and then were able to resist everything that the Tunisians threw at them.
Facebook
Tweet
Forum