Reflections on a 4-3-3 formation 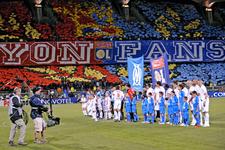 OL went back to a 4-3-3 formation against Nice, winning 3-1. Has this formation been the magic formula since the start of the season? Do OL score more often when using it?
A reminder : OL have played 33 matches (18 victories, 10 draws and 5 defeats) ; 52 goals scored and 28 conceded. The 4-3-3 formation in question does not include the one with Ederson, Pjanic and Delgado as third midfielder.

OL have only lost one game when starting with this formation , against Metz in the Coupe de la Ligue; 1 defeat in 15 matches (9 wins, 5 draws). On two occasions the formation was changed during the match (Nice & Fiorentina) in order to take a win or a draw.

This system has been used on 5 occasions in the Champions League, being changed at half-time against Fiorentina. 10 goals scored out of 14 ; 7 conceded out of 10.

When the trio Juninho-Toulalan-Makoun have started a match, excluding the game against Fiorentina where Makoun came off at half-time with the Italians 2-0 up, OL have won 8 games and drawn 2 having scored 19 goals (goals scored when all three players were on the pitch).
Videos