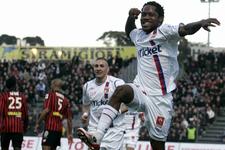 Despite controling the match after going 2-0 up with goals from Makoun (18') and Benzema (27'), OL conceded a goal just before the break. A player up in the second half, OL laboriously killed off the match with a second goal for Makoun (80').
For the trip to Nice, Claude Puel once again had to deal with the numerous injuries to his squad. Apart from the long term injuries (Clerc, Réveillère, Bodmer, Govou and Delgado), Fredéric Piquionne and Fabio Grosso are suspended. Because of this, the bench was made up of very young players, with among others, Kolodzieczak, Pjanic, Pied and Tafer. The pitch of the Stade du Ray was in poor condition after the 120 minutes played in the match against Vannes last Wednesday in the Coupe de la Ligue.

In the opening minuutes of the game, the players spent their time trying to get used to the pitch. Juninho slid the ball to Karim Benzema who hit a shot in from a closed angle but Ospina saved with his feet (5’). Fabio Santos was forced to knock th eball out for a corner after a cross from Fae (13’). After some good play, Keita turned and tried to fire in a long range effort, but was unable to hit the target (16’). Kader Keita moved past his marker and crossed th eball to Ederson who controlled the ball with his chest and played the ball in front of Jean II Makoun unmarked, who fired past Ospina (18’)! OL opened the scoring! Following a pass from Makoun, Keita came up alone against the Nice keeper but failed to control the ball. The ball dropped to Ederson who trieda lob, but Ospina was able to save again (21’)! Juninho fired in a free-kick that Benzema headed towards goal, but Ospina saved down next to his post (24’). Ederson flicked a pass to Benzema with the exterior of his boot. Benzema then tried to play the ball back to him but was blocked and the ball fell to Ederson who dropped a pass behind the Bnice defence. Juninho was offside but not interfering with play, moving out of the way for Benzema who broke through and blasted the ball past Ospina (27’). 2-0! Juninho then managed to hit the post with a free-kick from 30 metres out (32’)!! Hellebuyck, who picked up a knock to his knee in a duel, came off and was replaced by Bamogo (36’). The intensity of the match continued to grow. In first half stoppage time, a Ben Saada corner was flicked on and picked up at the back post by Apam who reduced OL’s lead (45’+1). Keita then fired in a beautiful cross for Ederson who threw himself towards the ball at the near post, but his effort went just wide (45’ +4). The referee brought the half to an end with the score at 2-1. Even though they were in control of the encounter, Claude Puel’s men managed to put themselves in danger quite stupidly.

Nice kicked off the second half in good style, with a ball played in behind the OL defence for Loïc Rémy but Jean-Alain Boumsong stretched out and removed the danger with the tip of his boot (47’). OL were playing a coubnter attacking game and after a run of over 60 metres, Juninho tried to shoot but was unable to hit the target (54’). On one of these counter attacks, Ederson was literally scythed down by Julien Sablé, who threw himself in with both feet up. He was, logically, sent off (57’)! Nice were under the cosh, but OL were unable to take advantage of the situation. After a corner from Ederson, Cris rose higher than everyone, but his header was clearde off the line (65’)! Juninho was then replaced by Mensah. The Ghanean came on at right back, with Fabio Santos moving up to the midfield (73’). Just afterwards, Ederson was knocked over in the box by Ospina. Penalty! Benzema stepped up, but his effort was saved by Ospina (75’)!! Mensah crossed for Cris, but his header was straight at the keeper (77’). A real shame! A Källström free-kick was flicked on well in front of goal by Benzema. Ospina was lobbed and Makoun had only to knock the ball into the net with his head (80’)! The final Nice substitute Adeilson violently elbowed Boumsong in the 86th minute. Red card! Nice finish up the match at 9 against 11! The youngster Yanis Tafer came on for Keita and played his first match in the L1. A final free-kick from Källström was headed just wide by Makoun (90’ +2).

This was a very important victory for OL even if, on a poor surface, the style was lacking. Claude Puel’s men controlled the match in the first half, but were unable to kill off the match and because of this put themselves in danger.
Videos