Claude and Cris face the press 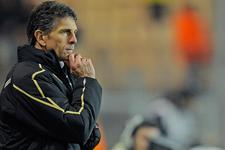 After a rain-soaked training session, Lyon’s coach and central defender still took time to face up to the media...
Why are Lyon having less success in attack? What do you think of the show you are putting on? How would you rate your performances in January? What do you think of this Nice side? Is OL under pressure? Just a few of the questions...

No doubt for Cris, with a smaller lead than in recent seasons, Lyon is playing under pressure: “It makes more sense to be in this situation than we have been in recent years with a huge lead in the standings. We need to stay focused until the end. Yes, we might lose out top spot, but the important thing will be then to win it back before the end of the season.” Tiring? “No, far from it. Every match is important, every competition.” Will Nice be out for revenge? “I don’t know. However, les Niçois must be disappointed at being eliminated from the French Cup. We’re heading to Nice to play well and claim all three points.”

Is this trip to the Stade du Ray special because of the first meeting this season? “Every match is tough for Lyon. Everyone wants to beat us, home or away. That’s not going to change this weekend. Every match for OL is like a Cup game.” For Claude Puel, irrespective of the first match, nothing has changed. “They are a good attacking side with three very quick players. Rémy, a good player always looking to get in behind the defence...”

Regarding the recent points dropped, what the analysis of January? “Obviously, we shouldn’t be dropping points at home. But, having said that, apart from the match against Lorient I’ve been satisfied with our performances. I was happy with the results, apart from the draw with Lorient. You mustn’t forget the conditions the matches were played in or when they were played. But of course, we would prefer to win each and every game we play.” And the show, Messieurs? Again, Claude Puel has the answer. “What’s a show? Lots of passes? Lots of goals? I don’t know. We know where we are and where we want to go and between the two there’s still some way to go.”

[IMG43571#R]And the pleasure Cris? “I always have fun playing football, even if it’s very tactical. We do what the coach demands of us. We work every day towards winning the title and know that other teams do to. I think we all more aggressive on the field. Everyone knows that’s how we have to be. In the changing-room everyone talks, chats. It’s changed quite a lot in recent weeks.” As for the difficulties up front, ‘le Policier’ puts it down to the opponents. “The opposition defences pay closer attention, when they see Ederson... Karim... And we don’t get forward as much. We respect our position more. The coach asks us to play as a block, together. And OL is still the team to beat. If we win every game 1-0, then we’ll still win the championship.”

January is behind us. February starts in Nice... “It was ok, except for that match against Lorient. February should be a good month...” We understand Claude Puel who announced that Bodmer would be playing with the reserves this weekend. Clerc and Réveillère continue their rehabilitation. And Delgado jogged on Friday. The Argentine should be sidelined for three weeks. And Piquionne? "That can happen to everyone... to be out of form. What I’m interested in is how he recovers, works, and reacts. He looked good at training." And finally, Fred? "I haven’t asked myself that question yet. He’s not available at the moment. It’s my choice.”
Videos