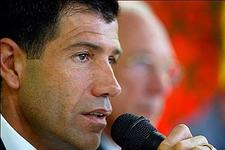 Enzo Scifo is currently the coach of Belgian side Mouscron. For two days, the former Belgian international – as ‘passionate’ about football as ever – was at Tola Vologe for a training camp alongside Claude Puel.
Why are you here at Tola Vologe?
“I’m currently going for my coaching badges. Because of the new rules, I have to study for a year and also have a training camp in an overseas side playing in the Champions League. Because I know Claude Peul very well, I thought it would be interesting to come down here and take a look. And what’s more, Lyon have been one of Europe’s best clubs in recent years.”

What do you think of OL? “OL are here to stay – they’ve already proved that. You can feel the experience, a way of working which is above the ordinary. I’m interesting in the running of the club, but also in the sporting side which is run by true professionals, and then there are the players. When you watch Lyon play, you get a very good impression of the club and feel a lot of admiration. This camp has let me confirm that impression, that feeling that OL are one of Europe’s biggest clubs. That year 2004-05, when it really was one of the best teams in Europe. The club has shown it’s here to stay and has managed to stay at the top which is the hardest thing. It’s an ambitious club which lives up to those ambitions every year.”

Do you think OL will win the Ligue 1 this year?
“I hope so for my friend Claude because I know he’ll do everything he can to make it happen. I think at the moment, observers are a bit harsh on the coach and the team. OL are leading the championship, qualified for the last 16 of the Champions League... what more can I say? OL has the quality to be champions, lets just hope that they have a bit more luck that at the start of the season and can avoid injuries.”
Facebook
Tweet
Forum