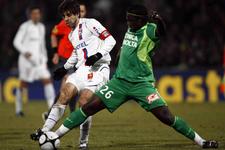 Trailling to a Kevin Mirallas goal early in the second-half, Lyon responded immediately through Brazilian skipper Juninho, and despite the sending-off of Frédéric Piquionne, there was no further change to the scoring.
Claude Puel had reserved a little surprise for this 97th derby. While observers were expecting Ederson to be given the nod on the right side of the attack, it was Frédéric Piquionne that started against his former club. There was also a kind banner in the Northern Stand in support of Sidney Govou, setting a date for the start of next season.

The atmosphere inside the ground as the two sides emerged from the tunnel set the scene as the Stade Gerland exploded in scenes of colour and joy! Les Verts were the first to shoot at goal through Mirallas, whose shot flew high over the crossbar (5’). OL responded with Fred Piquionne heading wide from Juninho’s corner (8’). Les Lyonnais struggled to get into their stride in the final third of the field. Chelito tried an off-balance shot which sailed away from goal (16’). Juninho was the first to call Janot into action with a free-kick from fully 35 metres out (20’). The Saint-Etienne ‘keeper electing to punch the ball clear! Karim Benzema then brought the Stade Gerland to its feet eliminating two opponents down the left flank before crossing to a vacant back post (30’). Benzema, still on the left, then took off on the shoulder of the last defender but his curling effort flew just over the top-right corner (33’). Moments later, Delgado who had injured his thigh, was replaced by Ederson. Les Verts carved out a great chance from a free-kick, poorly cleared by the Olympians. Benalouane shot with the outside of the left-boot, but Hugo Lloris produced a wonderful save to send it millimetres past the post (42’). Piquionne then controlled poorly with the goal at his mercy (45’)... Juninho, and then Benzema shot in turn but Janot produced two top draw saves (45+2’)! And so it was that the referee, Monsieur Lannoy, sent both teams to the changing-rooms at the half-time break.

Ederson was the first in the spotlight in the second-half – the Brazilians left-footed effort well stopped by Janot (48’). Piquionne took off towards goal before getting himself in a muddle. From the change-over of possession, the visitors countered and Mirallas inherited the ball on the edge of the area and neatly lifted it home over Lloris (50’). Les Verts were in front! It was the sign for the gloves to come off. Juninho took charge of a free-kick earned by Karim Benzema at the edge of the penalty box and equalised (53’)!! And then, moments later, from the kick-off, Fred Piquionne was late on Dabo and received a second yellow card and an early shower (54’). Playing with ten men against 11, les Lyonnais suffered. Isolated up front, Karim Benzema struggled to hold onto possession. The Stade Gerland held its breath when Ilan fell in the area after contact with Jean-Alain Boumsong (62’). The referee waved play-on. Mounier and Makoun replaced Källström and Juninho, respectively (79’), the latter with a slight knock. A final Benzema free-kick promised a final twist in the tale but in the end, the 97th derby ended 1-1.

Claude Puel’s players weren’t able to take full advantage of Bordeaux’s draw earlier in the evening at home to Lille, 2-2. So it was status quo at the top of Ligue 1 with Lyon maintaining their one point lead over Laurent Blanc’s Girondins.
Facebook
Tweet
Forum