Puel : « no signings during the transfer window » 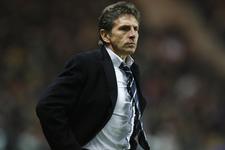 During his press conference, Claude Puel announced that OL would not be signing anybody during the inter transfer window...
When speaking to him about the evolution within the squad since the match against Grenoble, Claude Puel gave a detailed analysis and announced a decision. « We came back at the start of the year without any particular objectives. Then the match against Lorient was a complete mess. After that match, there was a lot of discussion and explanations . The squad became more united and has become more responsible. I like my squad just the way it is, the way it has become … We won’t be signing anybody in this transfer window . The transfer window is a tool to strengthen your side, to have that little bit extra whether it be a transfer or a loan. We haven’t been able to do this for a number of reasons. I’m not interested in bringing someone in just for the sake of bringing someone in. We have to respect the balance within the squad and not create any frustrations ».

Can it not be considered that OL have been weakened with the injury to Govou and the situation surrounding Fred? «Sid is obviously an important player; his absence is of course annoying. But, he lacked a certain amount of regularity over the first six months. Fred? There is stil a big question mark hanging over him. I don’t know if he is going to stay or go. I haven’t even asked myself whether he should stay or go. I don’t know what I would do if he stays . But, I’m not one to hold grudges. Every player has a chance here when they show their desire to succeed and break into the first team . There are a number of players who have been clever enough to evolve. I’m thinking of Delgado, of Fabio… Piquionne works very hard... What is important in a player is consistency. There is competition for places at OL, but everyone is in the same boat. I’m happy with my squad. They are getting stronger and stronger and there are players who are coming to the fore that were not there before. This squad still has a lot to give »
Facebook
Tweet
Forum