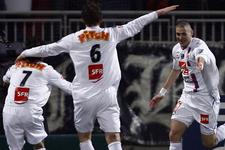 Claude Puel's men logically qualified against OM thanks to a goal from Karim Benzema early on in the match (2'). A man down after the sending off of Kader Keita (63'), Lyon were very rarely in any danger.
Claude Puel’s men started the match closing down their opponents high up the field. After a poor control by Zubar, Chelito Delgado intercepted the ball and slid it to Karim Benzema in the heart of the box, the striker had nothing more to do than push the ball home (2’). What a start to the game! OM swiftly reacted via a free-kick from Ziani which was picked up by Zubar but his effort went just wide of the post (7’). Lyon were in electric form, and on a counter attack Delgado tried to dribble past Taiwo, but the Argentinean lost out in the duel. Coming out for the ball far from his goal line, Lloris caught Koné in the face and the OM player had to come off and left his place to... Hatem Ben Arfa (22’). Baky Koné was taken to the hospital to under go an examination. The match was quite tough and the, more or mess, rough tackling multiplied. The tension also rose in the dugouts, with Mr Duhamel having to speak with Joël Bats. Kader Keita broke down the right wing and after beating Hilton tried a right footed shot, but his effort went a good metre wide of the goal (37’). In the final action of the half, Hugo Lloris came out perfectly to take the ball from the feet of Zenden (45’). It was at this point that Mr Duhamel called the first half to an end, with OL logically in front.

The match kicked off again with a change for OM which took sometime to finalise because of a problem with the player’s jersey... After two minutes of confusion, Samassa finally came on to replace Zenden. Benzema got straight back into action, breaking down the left and then letting fly with an unstoppable shot which crashed into the post (48’)! Benzema, played in perfectly by Källström, tried his luck again but this time Mandanda was able to save (60’). The match degenerated slightly after a foul by Brandao on Keita, to whivh the Ivory Coast international immediately reacted (64’). Both players picked up a yellow card, but Keita having already been booked 5 minutes early was forced to leave the pitch. OL had to finish the match with 10 men! With their numerical advantage, OM tried to reduce the score but Cheyrou’s effort, well watched by Lloris, flew just wide (69’). Juninho fired in a free-kick from the edge of the box, the Brazilian’s effort was touched by Mandanda and hit the crossbar with violence (83’)! Taiwo gave Gerland the shivers with a powerful effort from 25 metres out, but Lloris was able to save and even hold onto the ball (87’). At the end of normal time, Karim Benzema left the field to an ovation, and was replaced by Piquionne. In the final seconds of stoppage time, Wiltord picked up the ball in the penalty area, after a mix-up, but his shot was magnificently saved by Hugo Lloris (94’). The match was then brought to an end by Mr Duhamel, Gerland could let it’s joy explose!

OL took good advantage of an OM mistake at the start of the match to open the scoring, but were technically and physically on top throughout the course of the game. Lyon have now qualified for the last 16 of the Coupe de France where they will be up against Lille.