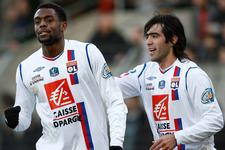 Lyon did their job and took advantage of their opponents fatigue at the end of the match to push home their lead and score a total of 6 goals! OL's goalscorers were Boumsong, Mounier (x2), Delgado, Keita and Piquionne.
Three weeks on, OL were not faced with a frozen, but waterlogged pitch. The lmanager ahd to deal with numerous absentees for this last 64 match of the Coupe de France. Mensah, Réveillère, Clerc, Bodmer, Källström, Juninho, Ederson, Govou as well as Fred were all out. Claude Puel gambled with playing the Brazilian Fabio Santos at right fullback.

The Bretons start the match without any complexes and do not allow OL to play. From the first real OL move, Anthony Mounier obtained a free-kick just twenty metres out from the opposition goal. Pjanic stepped up but was only able to hit the wall (8’). OL started, little by little, finding their feet. Benzema played through Miralem Pjanic who shot without controlling but his effort went just wide of the post (14’). Concarneau pushed forward through N'zinga, but he was flagged offside just as he came up against Hugo Lloris (16’). Anthony Mounier then took his turn at shooting, but was unable to hit the target (20’). OL stuck at their task and finally opened the scoring after a mix-up in the Breton defence following a corner. Jean-Alain Boumsong was unmarked in the six yard box and his shot, deflected off a defender, went over the line (28’)! The difficult task had finally been achieved by Cris and his team-mates. Following a pass from Karim Benzema, Kader Keita controlled and immediately fired off a shot, but his effort went agonisingly wide of Douard’s post (34’). Just afterwards, Fabio Grosso played in a cross to the back post, where Anthony Mounier leapt up to fire home a superb headed effort (35’)! Just seconds before half-time, Keita pulled the ball back to Benzema fired an effort in without controlling but missed the target (45’). Lyon were in control of the match, leading 2-0 at the break!

The second half kicked off with no changes to the playing staff. OL were the first into action with a header from Benzema after a Pjanic corner, but Douard saved the ball without difficulty (51’). The same duo, Pjanic-Benzema regaled the Roudourou with a one-two, but the OL striker found Douard blocking his path (54’). Kader Keita broke down the right and crossed in front of goal where, afetr a rebound, Anthony Mounier fired the ball home (62’)! Claude Puel took advantage of the lead to throw on Chelito Delgado and Fred Piquionne in place of Pjanic and Benzema (67’). Piquionne was in action quickly with a shot saved by the feet of the Concarneau keeper (68’). Delgado also came close to scoring after a poor clearance from the Breton defence. The Argentinean’s effort coming up short of Douard’s post (70’). Yannis Tafer, who will be 18 on the 11th of February, came on for Jean-Alain Boumsong. This was his first professional match for OL (75’). With this substitution, Anthony Mounier moved back into the midfield while Jérémy Toulalan took place in the centre of defence. In the final minutes of the match the Bretons tired, Keita picking up the ball fired in a shot forcing Douard into a superb save (83’). Delgado played in a great pass to Tafer in the box, but the youngster saw his header hit the post (85’). After some great work from Piquionne, Chelito Delgado took advantage and beat Douard for the fourth time of the evening (87’)! Just a few seconds later, El "Che" Delgado played in a beautiful pass to Yannis Tafer who hit the post again! Keita followed the ball in, turned and rocketed the ball past the Concarneau keeper (89’)! Fred Piquionne was the last player to crucify Douard with a header from the final corner of the match (92’)! The referee blew the final whistle with the OL players and staff forming a guard of honour for their amateur opponents.

Lyon did their job, taking advantage of their opponents fatigue towards the end of the match to finish them off scoring a total of 6 goals! Rendez-vous is now given for Wednesday and the last 32 match between OL and OM!
Videos